Tony Blair announces his return to UK politics, with a run in Scotland - Canary 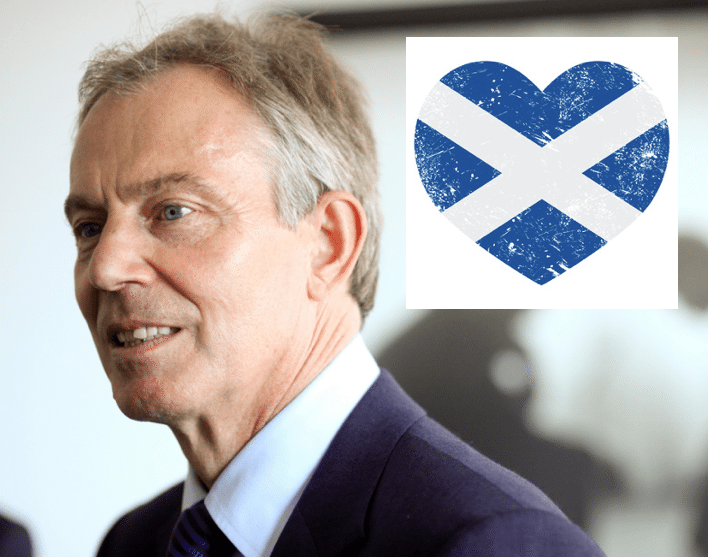 Tony Blair has announced he is making a return to UK politics, by running for a seat in Scotland in an upcoming by-election.

Former Labour Prime Minister Tony Blair has been out of UK politics since resigning the leadership in June 2007 to make way for his successor Gordon Brown. His downfall was largely linked to his failed military intervention in Iraq, which continues to haunt his legacy today. It therefore came as some surprise to UK voters that Mr Blair’s next position was to serve as Peace Envoy in the Middle East, acting as a mediator in the peace process between Israel and Palestine.

Peace did not come to the Middle East, and Mr Blair promptly resigned his position and now makes his return to UK politics. He will be running for Labour in the upcoming by-election for the constituency of Edinburgh South. On Sunday, Mr Blair held a press conference in the Edinburgh seat to announce his decision to run, citing his mission to ‘destroy the SNP insurgency in Scotland’.

“I mean look” Blair told the press conference, “People often forget I’m an Edinburgh boy born and raised. My family have walked and worked the streets of Edinburgh and Glasgow for generations.

When I watched Labour run out of Scotland by the Scottish National Party last year, I knew what I needed to do. I’m here because someone has to stop these people. That someone, is me.”

One senior reporter for The Scotsman had to be carried from the room after collapsing, unable to capture breath due to hysterical laughter. Another, from The Herald, was arrested for assault after throwing his voice recorder at Mr Blair, causing an immediate end to the press conference. Mr Blair was taken to hospital, where he required several stitches to his forehead.

Nicola Sturgeon was unable for comment, but a spokesperson for the party told The Canary:

“The Scottish National Party welcomes the news that Tony Blair will be attempting a comeback to UK politics in Scotland.

Defeating Labour in the 2015 election was an enormous achievement, but noone in the party holds the animosity for Ed Miliband that they do for that contemptible wee shite Tony Blair. So, bring it Mr Blair. We’re gonna kick yer bahoochie from Edinburgh back tee Sedgefield (raucous laughter)”

Labour leader Jeremy Corbyn was reportedly “too depressed to talk” about Blair’s return to politics, and Prime Minister David Cameron is yet to pass comment either. However, Shadow Chancellor John McDonnell spoke to The Canary, saying:

Frankly I’m furious. I barely made it through that Blair stuff the first time round. Now, amid all the other sh*t the country has to deal with, he’s back. The ink hasn’t even dried on the Chilcot Report yet!

Say what you like about Maggie Thatcher, and I’ve said most of it, but did she try and make a comeback? No.

That’s how a class act leaves the stage. Permanently.

You don’t wander back into the theatre 9 years later, in the middle of another show, to play your f*cking encore!

Honestly. The man is a hoofw*nking bunglec*nt of of the highest order, and I’m done with him.

Asked if this meant Mr McDonnell would fail to endorse Mr Blair or support him in his run, he responded:

What do you f*cking think?

The call was then terminated.

The latest YouGov poll of Mr Blair’s popularity in Scotland placed him beneath both former leader of Scottish Labour Jim Murphy, and Hitler.