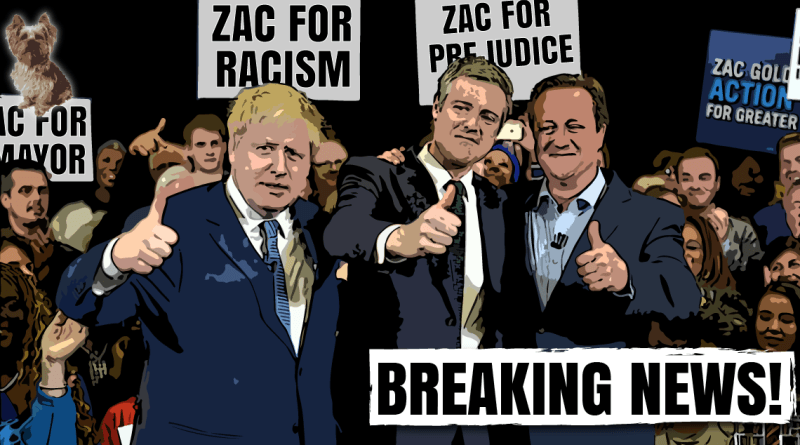 THIS POST IS SATIRICAL. It is republished here with permission by authors at The Hourly Terrier, go check out the rest of their awesome work when you’re done.

The Conservative Party have once more found themselves divided this week – torn between those who think that racism wasn’t the right tactical choice, and those who basically just think “f*ck ‘em” (MPs like Michael Fallon, who is quoted several times in this BBC article – quoted so much in fact that they couldn’t find space to quote from any of the Tories who were critical of Mr Goldsmith).

To be fair, several prominent Tories have called the campaign out for what it was – i.e. out-and-out racism – but many seem to be judging it more on the basis that it failed, and not by the fact that it was pure and unbridled bigotry.

We spoke to a top Tory campaign strategist – one Cruella Chienmerde-Couer to find out what she feels was wrong with Zac’s campaign:

Q: “So, Cruella – what do you think the problem with Zac’s campaign was?”

CCC: “Our analysis is telling us that focussing so much on Sadiq meant that we didn’t convincingly explain what a Conservative Mayor would stand for.”

Q: “To be fair, I think people did get the gist of what he’d stand for, and that was racism.”

CCC: “Hmm, yes – that is what people are telling us. We certainly failed to connect with people aged 18-45 who consider themselves to be racism intolerant, and there are a lot of these intolerant people about, unfortunately.”

Q: “And do you have a problem with the fact that racism is just inherently wrong?”

CCC: “Could you define ‘wrong,’ sorry? Do you mean as in ‘unsuccessful’ or ‘legally dubious?”

CCC: “Evil, you say? Well it did give me that tingly feeling watching it, so I suppose you could say that, yes.”

CCC: “Evil is bad? No – I’m pretty sure that’s ‘eagles,’ actually. Because they’re all environmental and that.”

Q: “Urgh – anyway – another problem is that although several lower-tier Tories have criticised the campaign, there was barely anyone speaking out while it happened. And also, this campaign was fully supported by the likes of David Cameron and Boris Johnson – politicians who are yet to admit that Zac’s approach was reprehensible.”

Q: “But you have done something wrong!”

CCC: “Well good luck getting anyone important to admit that.”

Q: “When there were accusations of anti-Semitism in the Labour Party, Jeremy Corbyn immediately suspended those involved and launched an enquiry into the matter – will David Cameron now follow suit to prove that the Tories don’t have a problem with racism?”

CCC: “Oooo – big mistake. You just mentioned the words ‘Jeremy Corbyn’ and ‘anti-Semitism’ – now that’s all anyone will have to report.”

Q: “What? We’re interviewing you, numb-nuts, and we’ll report this however we like.”

CCC: “And who’s going to read it – the sort of people who believe whatever we have the BBC tell them, or a load of terrorist-sympathising tw*ts like yourself?”

At this point Cruella stood up, farted in our general direction, and then left the building.

And although it stank – stank so bad that we considered catching up to her and convincing her to visit a vet – the stench was still no worse that that of Zac Goldmith’s awful, awful campaign.

Featured Image via The Hourly Terrier