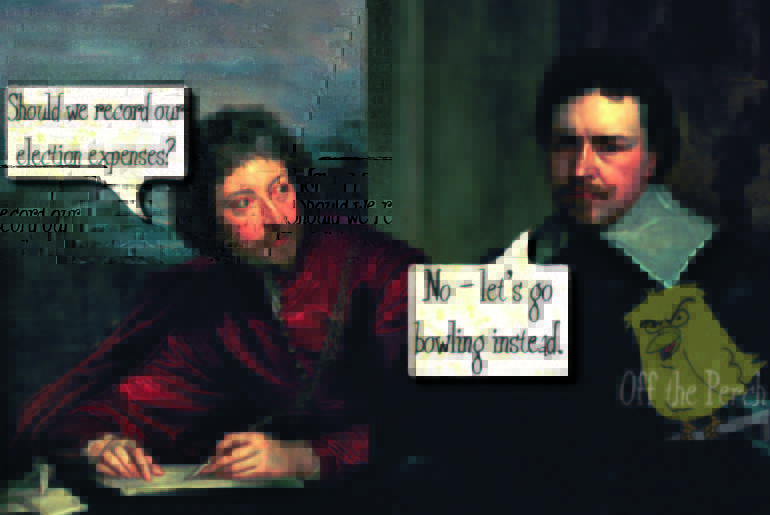 Following more revelations in the Election Expenses Scandal (a scandal so big that most news sites can’t even fit it on their websites), The Tory party have once more found themselves on the back foot – dodging questions like a one-legged tennis player returning service on a capsizing cruise liner.

The Tory line until now has been that it was all simply an “administrative error” – an error so large that it suggests that they wrote their expenses on dinner plates and then had them tallied up at a Greek wedding.

In an attempt to find out more, we caught up with one of the MPs involved – one Peter Moët-Van Moatleech:

Are you people still banging on about this? Have you not got lives to get on with? I mean – we’ve all misplaced cash, haven’t we? You go out for a little tipple one evening and later you think – ‘golly, I’m sure I had an extra 20k on me when I left!’

“Some times it’s in your other pocket, and sometimes you threw it at a Turkish madam to catch her attention, but most of the time it’s just gone – and you know what? – it isn’t a big deal!

“It’s you people – you’re all obsessed with money! Moaning on because your yearly wage is down by about £1,000 – or because we’re spending a few billion less on public services – as if these were in any way large figures! You go on and on about the most piffling sums, and then you act as if WE’RE the ones who are wholly motivated by finance!

“No if you’ll excuse me, I need to go and collect my £50 notes from the dry cleaners.

What seems to be undoing the Conservatives, however, is that unlike successful authoritarian governments, they have failed to “good boy” the attack-dogs of authority – cutting spending for the police and legal system – resulting in a judge throwing out Tory objections as:

Which isn’t exactly how he phrased it – but it certainly summarises his gist.

For the latest on just exactly what is going on with the election expenses scandal, keep an eye on The Canary’s News & Politics section.