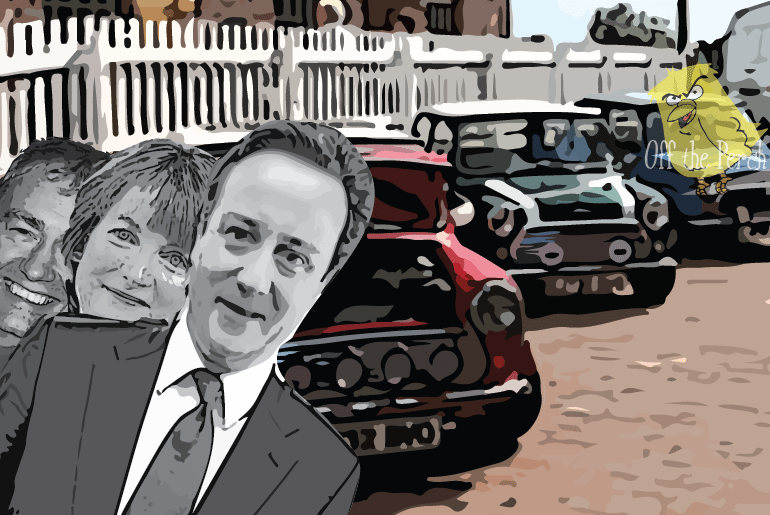 In a scene similar to popular con-movie The Italian Job, the leaders of three UK political parties (and Harriet “Also There” Harman) appeared in front of three Minis yesterday to represent…

Well, David Cameron claimed that the Vote Leave Tories are perpetrating a “con-trick” on the UK – which is probably a fair assessment – especially as Boris and co are making wild and un-costed claims about what may be possible post-Brexit, and yet don’t seem to have any idea of how the split will actually work in practice.

So obviously there is a big similarity between them and the crew from The Italian Job, as Boris is saying –

Hang on a minute, lads. I’ve got a great idea,

-but you never get to see what his idea is.

Vote Leave are also perpetrating the classic ‘bait-and-switch,’ as they’re attempting to sell voters on the idea that the European Union is the boot that’s pressing down on their necks, and yet they keep accidentally admitting that post-Brexit they’re going to gut our employee rights like a drunken fish monger with a blunt knife and a deadline.

The problem with yesterday’s press-event is that Cameron and the gang appeared with the Minis themselves – visually implying that they were the conmen. There was also the problem of them appearing with Minis at all – a brand of car which emerged from the now largely defunct British car manufacturing industry, and is currently owned by the German BMW.

Thankfully for the Remain Camp, however, Jeremy Corbyn was not one of the politicians in attendance, and so the press were able to simply report on the words that people said – instead of once more jamming the high-pressure air pump of sensationalism into the one-tier trifle of appearance.

We should also point out that Natalie Bennett appeared with a bicycle instead of a Mini. Possibly that was due to the whole environmental thing, although it could just as equally be that her position outside of mainstream politics has given her a much better radar for problematic symbolism.