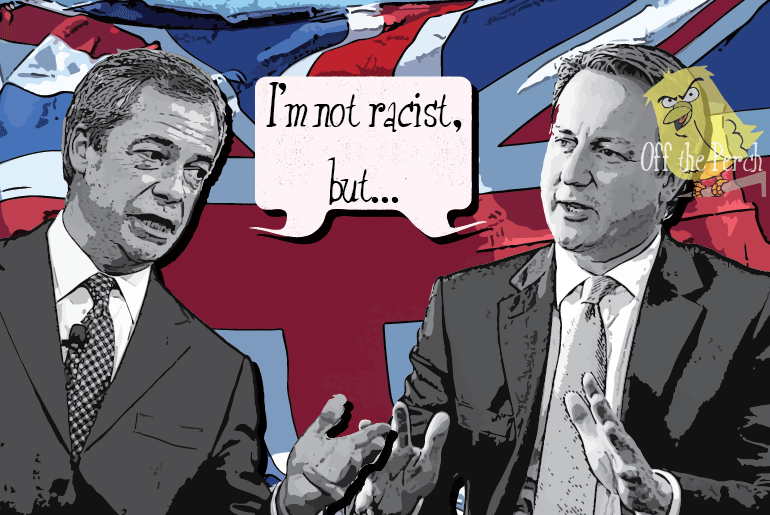 Following several arduous months of campaigning, the debate finally came to a head on Tuesday night, as David Cameron and Nigel Farage argued about whether our racism should be completely blatant or a little more sly.

Although superficially we are calling it a referendum on our EU membership, the debate has unfortunately been handed over to the far-right and less-far-but-still-pretty-far-right, and as such the public discussion has become something else entirely. This means that although Farage and Cameron represent opposite sides, the main thrust of both arguments is that the only way of protecting ourselves from foreigners is to vote leave/remain.

We spoke to an everyday man on the street – one Joe Bloggs – to find out what he thought:

Well, I’m just an everyday man on the street, and I know that I am, because the papers said so. I also assume that their view of me encompassing the entire British experience within my one patriotic body is true, because that’s what I’ve always suspected anyway.

From what I can tell, if we vote to remain we’ll have to spend the rest of eternity tied up in red tape as fruity European fishermen force us to eat halal bananas by the kilogramme. If we leave, however, the sausage-brigade will stop sharing their security information with us, and we’ll quickly be overrun by leftist jihadis who want to spend their benefit money on application videos for The Great British Bake Off.

I think that Corbyn fella wants us to just lie down and let the migrants crawl all over us like a giant swarm of insects, but thankfully he wasn’t allowed to speak last night, as if he had said all that, I think I would have lost it.

At this point we asked Mr Bloggs if he could try thinking about foreigners as people instead of shape-shifting, alien terror locusts, and to be fair to him he did try – straining his face in effort as he attempted to pass the kidney stone of propaganda through his mind-wiener – but unfortunately you can’t simply undo years of blatant racial othering with one conversation.

Of course, there are also people who claim that they’ll be voting based on the actual issues that Brexit raises. Although I’m not sure where they found out what those issues are, as they’re certainly not reporting them in the papers.