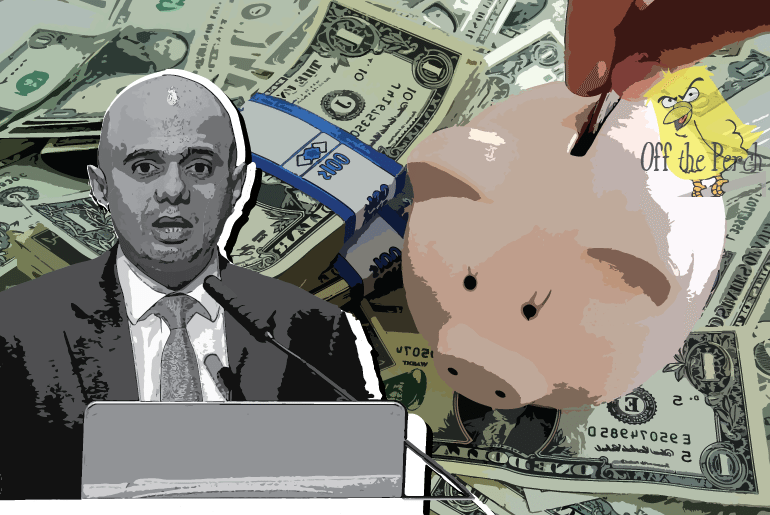 The Department for Business, Innovation & Skills is advising parents to allocate part of the pocket money they give their children to advertising – so the nation’s young people can start to detach themselves from their own sense-of-self at an earlier age in order to increase their potential profitability in the future.

This is what the Business Secretary, Sajid Javid, had to say, in an interview that he gave to Business Boy magazine earlier this week:

The best thing about the rise of the internet and reality TV is that everyone knows how to market themselves nowadays, whether it’s those Irish Eraserhead-twins from The X-Factor, or that bile-frothing, Irma Grese-next-door woman from The Apprentice.

I started giving my sons their own advertising budgets a few months ago, and I’m pleased to report that both of them are already seeing positive results. My oldest son adopted the name ‘Hot Boy Enigma’. He used half of his budget to pay his mates to wear t-shirts with pictures of his face on them, and the other half to tattoo his initials on to several of the local homeless population.

The results have spoken for themselves, as Hot Boy Enigma has had 48% more kids coming round and asking if he wanted to play since the campaign began. He’s also managed to completely adopt talking in the third person. This makes it much easier to advise him on marketability. I can give him advice that would seem a bit awkward and dehumanising if I was giving it to my son, but seems totally fine when proffering it to the cross-platform, hyper-event that he’s Franken-apped himself into.

We’ve also found that this sort of attitude helps make artistic people less… well… less annoying, basically. It used to be that these art-bags would say things like ‘I’m a poet, and I write poems,’ or ‘I’m a painter, and I paint paintings,’ and you’d think, ‘yawn – let me know when you’ve come up with the next Harry Potter or 50 Shades of Grey.’

Now, however, a lot of the younger crowd are happy to think of themselves as ‘creatives’ – as if they were one of Donald Draper’s soulless advert whores. These creatives don’t create a load of hard-to-value ‘art’ like those dreadlocked university wasters either – they create ‘content’ – the beauty of ‘content’ being that it’s created with the express intention of being consumed – the beauty of ‘creatives’ being that they’ve willingly accepted their role as facilitators of consumption.

By drumming this sort of attitude into primary school children, we feel that we can help them to realise the oddity of feeling like they should have any emotion for or attachment to their work, and that the only question which art should ever pose is ‘how much will it sell for?’

Obviously, we’ll have a few left-wing Leonardos complaining about all this, but every other profession has had to stop taking pride in their work, and if these arty-farty types think that they’re any different, then they all need to grow up if you ask me.

Because really – why can’t we have poetry that slots together with the unimposing efficiency of a flat-pack wardrobe? Why can’t we have journalism that’s as mild and unobjectionable as a Barratt show home? Why can’t we produce novels that pass through the body with all the nutritional benefit of a Big Mac – leaving the reader only slightly ravenous and somewhat ashamed afterwards?

If you’re worried that this latest governmental scheme will lead to a society filled with vapid, self-promoting Nathan Barley-types, don’t be. We’ve sunk to that point already – and you really need to start worrying about how much further things can sink from here.