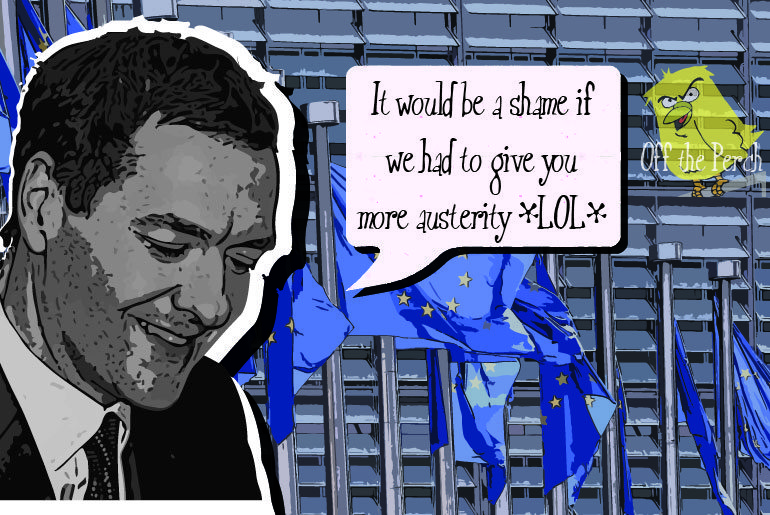 After taking a back seat for several weeks, George “Google-Deal” Osborne has dipped his toes back into the toxic waste spill that is the Brexit debate this week.

Although the Remain Squad have been keen to stress that Brexit would be both a leap in the dark and complete and unfettered chaos, George Osborne is no mere mortal, and with his twin super powers of self-confidence and shamelessness, he has been able to place a pretty precise figure on the maelstrom of disarray that awaits us.

Osborne claims that he’s based his numbers on IFS figures which suggest that Brexit could subject us to another two years of austerity – which is terrifying – especially as austerity is a made up concept that can be extended on a whim. This became particularly apparent when we were rewarded for completing the initial five years of austerity we were promised with a mere five years more.

To better explain how austerity works, we should look to Greek mythology, and the legend of Sisyphus. Sisyphus was the king of Phyra, although he was mainly famous for being a crafty and deceitful pr*ck. As punishment for his conniving tw*ttery, the Gods punished Sisyphus to push a massive boulder up a hill for all eternity – the colossal rock rolling back down to the hill’s base every time that he reached the top. In comparison to our situation, austerity is the great rock, and we are Sisyphus – only instead of being punished for our own deviousness, we’re being punished for the deviousness of our punishers.

And also, to make matters worse, we’re only being subjected to this punishment because a large enough proportion of us voted for it.

So how is Osborne arriving at these figures, if not by rigorous, and informed deduction? We spoke to an insider at the Treasury to find out more:

Well, we usually just think – ‘how much would we like to give away in tax breaks to our friends?’ – and then we cut that much from public services. Simples.

The Leave Battalion have predictably reacted badly to Osborne’s intervention – branding the announced figures as a “Punishment Budget.”

Despite the fact that many of these Tories accept that Brexit will lead to some level of economic turmoil, and that the way they’ve always voted to deal with economic turmoil is to implement harsh austerity measures that mainly affect the working class, they are now all in uproar over the idea that…

Almost as if they never really believed in austerity in the first place.

Or that they’re lying now because austerity doesn’t suit their current agenda.

Either way, what is clear is that absolutely nothing is clear – or at least it isn’t if you listen to what anyone is saying, anyway.