Claims the Labour coup was accidentally triggered by a pigeon - Canary 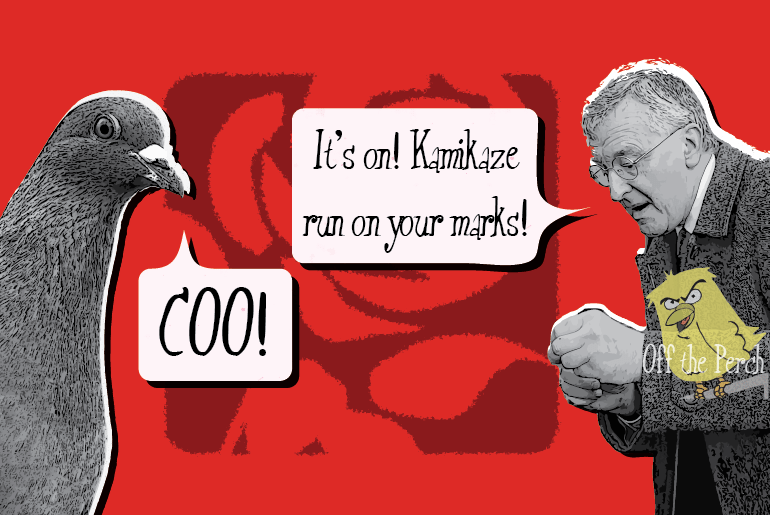 Reports are coming in that the coup that’s wafting through the Labour party like a fart in a job interview was triggered accidentally by a cooing pigeon.

The chain of events began when Hilary Benn was sitting at home listening to his recording of The Most Rousing Speech of the 21st Century™ – a speech which he himself had given in support of the Syrian war.

“I wonder what ever happened with all that?” Benn asked his aide – unaware that the case for war was quickly exposed as being 50% lies and 50% bullsh*t, and that ultimately we just bombed some empty fields a few times and then stopped talking about it.

Before his aide had a chance to answer, however, Benn heard the sound of a pigeon outside his window.

“It’s happening,” Benn shouted – his fingers tightly gripping the arms of his chair. “It’s happening!” – and before his aide could explain that it was just the errant call of a local sky-rat, Hilary was off.

If he’d stopped to assess the situation, he might have realised that voting intentions have actually increased for Labour since the referendum, that Corbyn met the targets which were set for him, and that initiating a leadership contest in the run-up to a likely general election makes as much tactical sense as launching fresh airstrikes against Iraq using Ed Stones as bombs.

Once it had begun, the coup dispersed through the shadow cabinet like diarrhoea in a Jacuzzi – with some of the splitters accusing Corbyn of being the man to have split the Labour party.

Unfortunately for the Blairites and associated malcontents, it seems that Corbyn still commands the support of the Labour membership, whereas the plotters seem to largely only have the backing of the sort of people who WOULDN’T like to see Tony Blair trialled for war crimes.

And speaking of Tony Blair, separate reports have been coming in that the former PM has been spotted wearing a pigeon costume and shouting:

This has lead many to hypothesise that Tony set this whole thing in motion so that he might escape the wrath of the Chilcot enquiry via a less than justice-inclined Labour party.

Unfortunately for Blair, however, he was unable to incite the Deputy Leader into action, as Tom Watson was “having it large” at Glastonbury, and so obviously he just assumed that the cooing man-pigeon was some sort of party-induced hallucination.

Watson has now returned of course, although he’s so far sitting on the fence as he tries to figure out if a cooing pigeon is a good enough reason to rally behind New Labour’s lame ducks.

Regardless of what you may think about all this, we should at least give credit where credit is due, as these scheming MPs have managed to make their coup attempt the main news story out there – despite the fact that:

1)  The biggest upset to the UK since the second world war has taken place.

2)  The PM has resigned and the Conservative party is at risk of devouring itself.

3)  Honest-to-goodness old-school fascism is putting jack-boots on the streets again.