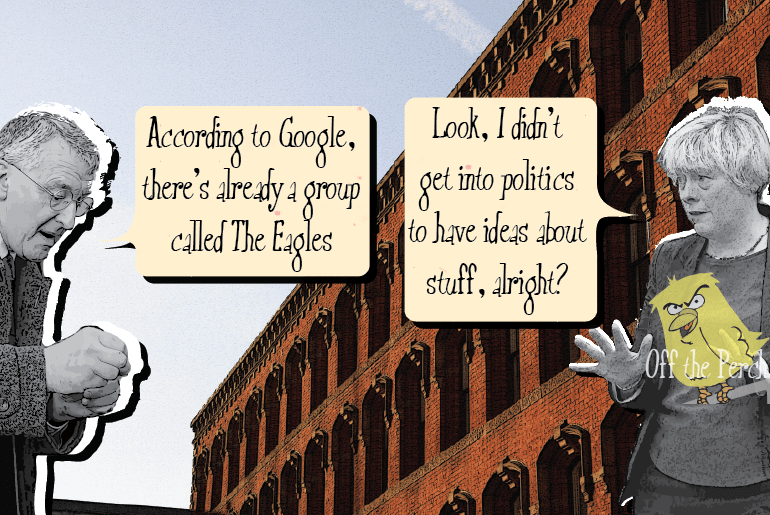 It’s looking increasingly likely that the Labour Party will split into two separate parties – much like how when you cut a worm in half the brain goes one way and the arse-end goes another.

The unions are currently backing the side with a history of supporting workers’ rights. Meanwhile, without the backing of the labour movement, it would be frankly obscene for the Chicken Coupers to continue to call themselves ‘Labour.’

So what should they call themselves?

Here are several suggestions from the team at Off the Perch:

It also works from a more critical perspective, as nu-metal was an offensively over-produced insult to actual metal, and the splinter group’s relationship to Labour would be similarly degenerative.

New Labour was in reality a Trojan Horse for the super-rich to pass straight through the walls of social democracy and into the unguarded treasury beyond. Superficially, however, the party was one of middle-England, middle management types – the sort of voters who would like things to be nice for everyone, but would happily settle for things just being nice for themselves.

As well as linking to the dismal and pathetic #ChickenCoup, it would also reference the fact that when you cut a chicken’s head off, it will run around like a clueless d*ckhead for quite some time before dropping.

The Knights of Blair

Sweeping down from their castle of privilege on horses made of spin to save the damsel in distress  – Tony Blair – from the clutches of the evil Manti-Corb and his army of trolls.

Is how they’d see themselves.

Because that’s what these bozos are doing to themselves really – their splinter party is as hotly-anticipated as a super-group comprised of the bass players from Coldplay, Nickelback, and The Wiggles.

Thatcherism was one of the most influential forces to ever hit the UK – the most comparable force before it having been The Black Death.

When The Black Death hit the UK, what any sensible person would have aimed for was its eradication. If the Blairites existed back then, however, they would have attempted to work with the disease – possibly hoping that by throwing it the odd pleb to kill off, the rest of them could escape its ravages un-ravaged.

This is why Tony Blair said it was his job to:

build on some Thatcher policies

When the decent thing would have been to tarmac over them entirely and start again from scratch.

Because if they’re going to carry out this farce, they might as well go the full Sid James and have a laugh with it.