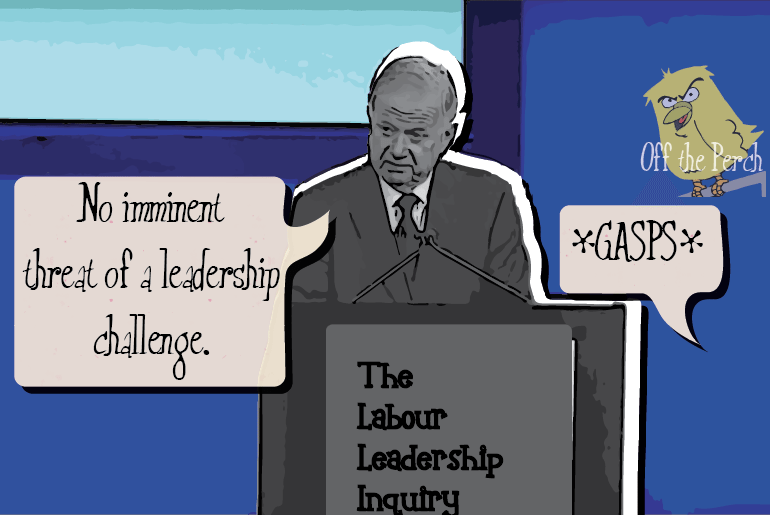 Now that he’s finished his epic report on the Iraq war, John Chilcot has been looking for his next challenge, and Off the Perch can exclusively report what that is.

Many thought that The Iraq Inquiry was taking so long because it was going to be an insulting and drawn-out whitewash. When we saw the video of Tony Blair defending himself, however, it became clear that Sir John has likely been fighting a protracted campaign of mental warfare against what may arguably be the most perverse and dangerous mind of our time.

Allegedly, the job he has chosen is to draft a timetable for a potential leadership challenge against Jeremy Corbyn – a job which he is currently predicting:

Although dealing with the deeply troubled Blair was clearly a harrowing ordeal, Sir John has informed us that encouraging the Parliamentary Labour Party into becoming something like an effective political force may prove to be even more troubling:

Although Blair has many, many faults, you can’t deny that the man exudes politics – or at least that he exudes something which looks like politics anyway. Although the current Labour party is comprised of the children of Blair, the unfortunate fact is that Tony was both mother and father to these inbreds, and the incestuous, political mutants he has spawned are about as adapted for politics as a trout is for a river of semi-molten glass.

Although it will obviously take years of arsing about before Chilcot is able to even begin to formulate some sort of workable schedule for the leadership challengers to follow, here’s what Off the Perch believes such a timetable could look like:

·      Try to find someone who didn’t vote for the Iraq war/didn’t vote for austerity/doesn’t come across like pond slime that’s been moulded into the shape of a person.

·      Attempt to join the Tory party but get rejected anyway because they’re not rich/devious/psychopathic enough.

·      Throw a stick at Jeremy Corbyn and then run-away when it accidentally hits some kid – later on brand the kid a ‘Trotskyist.’

·      Listen to ‘Things Can Only Get Better’ on cocaine for inspiration.

·      Realise that echoing noise they keep hearing is the sound of their ambition bouncing around in the void where their souls should be.

·      Blame Jeremy Corbyn for the amount of time it’s taking them to launch a leadership bid against Jeremy Corbyn.