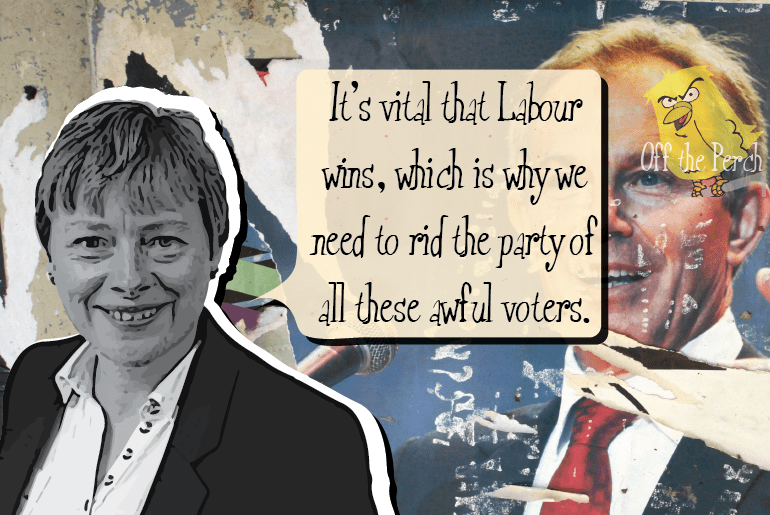 Following several weeks of acting like a political human shield (and thus protecting the Tories and Tony Blair from Jeremy Corbyn’s spud-gun of righteousness), the Parliamentary Labour Party (PLP) has finally come forward with a candidate to topple the socialist Labour membership.

The candidate in question is Angela Eagle, and although in the interviews she gave on Sunday she came across like a person who had sh*t in the shower and was expecting imminent discovery, she did appear infinitely less shifty today. This, however, is potentially only because she remembered to bring her cheering section with her – meaning that every non-answer she provided was met with the sort of rapturous hooting that would make an American cinema patron look like an Oxbridge librarian.

But why is the PLP looking to topple the membership?

Although mainstream thought is that Corbyn is the biggest threat to neo-New Blairism, Jeremy’s contribution is ultimately dwarfed by the impact of hundreds of thousands of socialists wedging themselves in between MPs and the corporate hand-outs that companies like HSBC dangle over the careerists’ salivating, liar’s mouths like dog treats.

This is also why MPs as high-up as Tom Watson have been heard referring to Momentum as a “bit of a rabble” – a rabble who do untoward things like criticising the MPs who voted to bomb Syria based on a case so riddled with untruths that it made the sexed-up Iraq dossier look like the Chilcot report.

And yet why would they field Angela Eagle as a candidate – a woman with the voting record of a Blairite, the inability to answer a question of Liz Kendall, the hollow platitudes of Yvette Cooper, the flip-flopping untrustworthiness of Andy Burnham, and the charisma of a re-heated airplane lasagne?

Well, there are a few options.

The first is that Angela Eagle is playing the role of a “heel” – which in pro-wrestling terminology is the name for the sort of wrestler who acts like a complete and utter tool to encourage the audience to boo them. The theory is that while Angela Eagle is taunting the membership with her inherent awfulness, someone like Andy Burnham will come running up behind Corbyn and pin him when nobody’s watching. Presumably what will then happen is that the Corbyn-supporting membership will quietly file out of the political arena, because if there’s one thing that people aren’t bothered about right now, it’s the blatant abuse of a democratic process.

The other option – the one which seems the most likely – is that these blundering, blithering idiots actually have no idea what they’re doing – have no comprehension of why the public have abandoned them – have no grasp of the reality which is that their tired, Blairite shtick has lost them two consecutive elections.

Regardless of why they are attacking the party members, however, people should be well aware that their long-term goals involve getting rid of said members, so threatening to leave is in no way a threat.

People try and argue against this, saying things like – “but they want our:”

c) Boots on the ground.

People who argue this, however, may be forgetting that:

a) You can win an election without a large membership,

b) You can quite easily get money from big business simply by being a little bit corrupt, and

c) The people who want you gone would happily shoot themselves in the foot with a bazooka if they thought that the resulting mess would somewhat splash over their rivals.