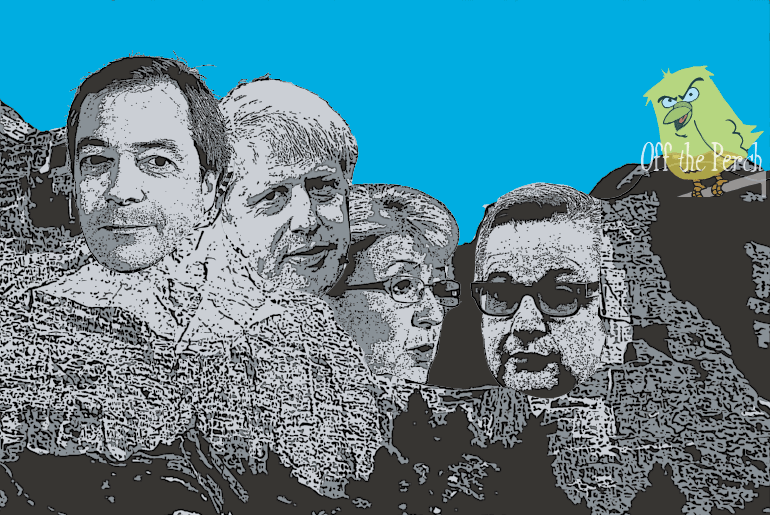 Following their victory in the EU debate, the brave heroes of Brexit have been summoned to English-Valhalla to spend the rest of eternity quaffing Carling Black Label with St. George, King Arthur, Beowulf, Winston Churchill, and Edd the Duck.

But how will those left on Earth remember the great sacrifice that those brave folk made for us?

How will we remember who’s responsible for the state of the UK?

How will we remember what they looked like even, when they were recalled from the political scene at such breakneck speeds that the shutter-flash image of the back of their turning heads was etched into our retinas like a lightning strike?

An answer to that may now have been found, as plans are underway to immortalise the Brexiteers in a similar manner to how Mount Rushmore commemorates America’s greatest Presidents (greatest Presidents and Teddy Roosevelt anyway – what was he hiding under that moustache!?).

The beauty of the monument is that in years to come – when the country is what it is – we’ll all be able to take our grandchildren to it and say:

Those guys. Those are the guys to thank for all this. Remember that.

The sculpture itself will be called ‘Rush-Off Peak,’ and although some negative people have suggested that the name implies the Brexiteers ran away like panicked cowards, Andrea Leadsom claims that it actually references the word ‘rushoff’ which means ‘super fantastic’ – a word which she is very familiar with, as she authored the modern English dictionary.

Or at least claimed she did in her most recent CV.

Regardless of the semantics anyway, the sculpture should be ready by 2019.

Unless of course the sculptors all decide that they can’t be bothered seeing it through, in which case who can possibly say?