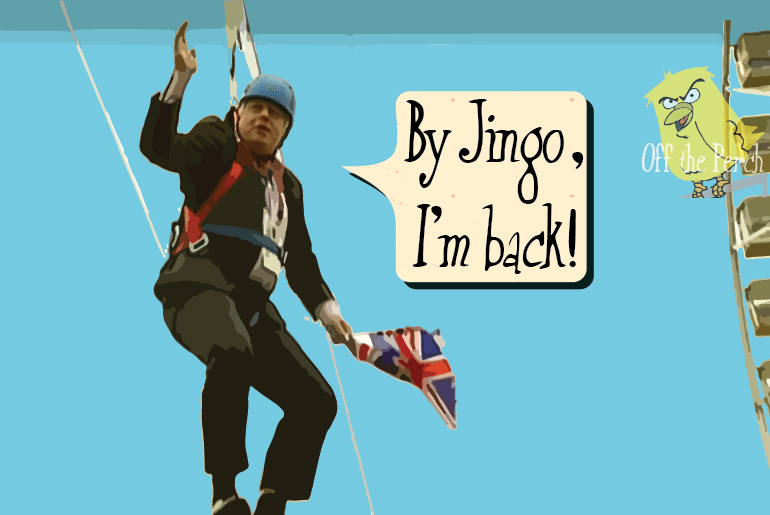 Following his successful campaign of racist rhetoric (because whether or not you agreed with Brexit, that is demonstrably what he ran), Boris Johnson’s tireless dedication to “putting it up ‘em” has been rewarded with the foreign secretary role – a title which will henceforth be known as the Overlord of Racist Relations.

We spoke to Prime Minister May’s press secretary – one Lucifer Hellprick – to find out more:

Well, the fact is that Brexit has weakened us on the world stage, and a lot of countries are thinking about giving us a raw deal to show us what for. Now that we have an Empress, however, it seems like the next logical step is to reboot the Empire – namely so that we might once more use our God-given power to bully the smaller, sh*tbag countries around and make ourselves feel big again.

The problem, obviously is that we sold quite a lot of that God-given power off in recent years, and so we need a foreign secretary who can put Johnny Foreigner in his place with the sort of verbose conviction that only centuries of tofftastic inbreeding can provide.

Err… by which I mean ‘breeding.’

Johnson’s proclivity for ‘putting the ethnics in their place’ goes way beyond his Brexit campaign, of course, as he was previously famous for saying things like:

The problem is not that we were once in charge (of Africa), but that we are not in charge any more.

He also more recently suggested that the President of the United States was unable to think logically due to the petty and ungrateful savagery of his barbaric Kenyan ancestry.

This last incident is particularly important, as although Boris may seem ideally suited to operate as the dishevelled, colonial terror-blimp that we send to hover over our colonies like a swivel-eyed condor, he is obviously less-well suited to dealing with the sort of highly-strung world leaders whose itchy trigger-fingers are eternally placed on the button.

We spoke to another source within the May administration about this – a source who has requested to remain anonymous:

Look, although we’re saying Boris is going to be out there doing stuff, he really won’t be. Basically, we’re just trying to make sure that he’s kept busy, as the last time he was in between jobs, he managed to spike to entire global economy.

I’m hearing that he’s largely going to function as the Empress’ court jester. There’s also a suggestion that Theresa wants to do a reverse-‘Return of the Jedi’ type thing – with herself lounging around in the throne room like Jabba the Hutt, and Boris dancing about for all the visiting dignitaries in a golden bikini and wig.

Could you excuse me for a minute, actually, because I need to go and vomit again.

Regardless of what Boris will actually be doing, however, one thing is definitely clear: