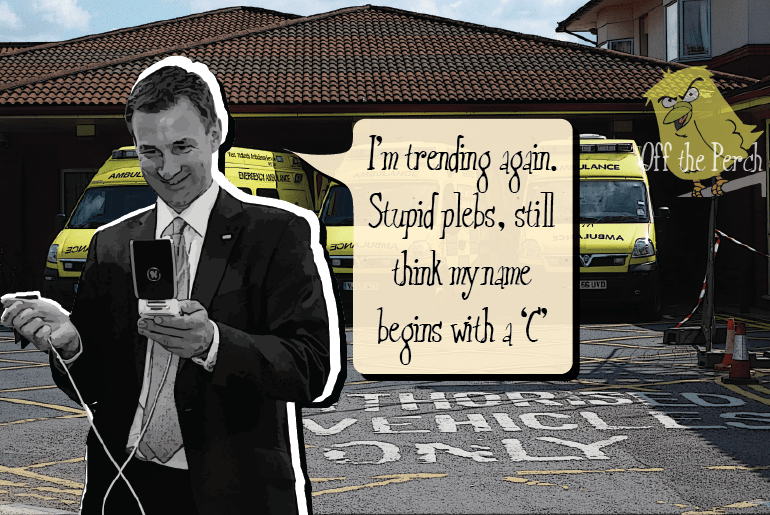 Theresa May has shuffled the cabinet this week to the point that the word ‘shuffle’ doesn’t really do it justice – the closest verbs to what actually happened being ‘razed,’ ‘gutted,’ and, ‘culled.’

Despite that, however, one man has survived the grand expunging – a man who definitely hasn’t turned everyone he represents against him – a man who positively isn’t viewed by the country at large as some sort of live-action cartoon weasel – a man who almost certainly hasn’t replaced MRSA and Dr Harold Shipman as the greatest tragedy to have ever afflicted the NHS.

And that man, of course, is Jeremy Hunt!

'Reports of my death have been greatly exaggerated…' Thrilled to be back in the best job in Government.

However, all may not be as it seems, as although Jeremy is clearly a complete and utter Hunt (I heard some cockneys calling him that – I assume it’s complimentary), apparently the reason why he’s kept his job is that none of the other MPs could picture themselves in the role even if they had a 10ft selfie-stick.

To find out more, we spoke to a former chancellor (who shall remain nameless) in an east-end opium/dominatrix den:

Look – we know that Dr Riff-Raff and surgeon Trot think Jeremy is doing a terrible job, but actually he’s completely smashing it, and the problem is that these PhD plebeians don’t understand what that job actually is.

The fact is that it’s our aim to kill the NHS off, and not in a quick or dignified fashion either – we plan on roughing it up a bit first and making all of the other public services watch.

Now you might think that running a failing department is easy, but it takes nerves of steel to be the man at the helm of a sinking ship – especially when your crew are desperately trying to prise your fingers from the ship’s wheel as you plough head on in to the iceberg.

Nerves of steel or a gormless inability to feel shame anyway – the latter being the skill set that Jeremy possesses.

Although a small number of people may have gone online to say unkind things when it was thought that Hunt had been given his marching orders, it was good to see that the people of integrity – the people of decency – the people of humanity were there to defend our Health Secretary’s honour:

I’m on a hospital ward with my son, awaiting a delayed and postponed operation. Huge cheer just erupted at news Jeremy Hunt has been sacked.

We need someone out there reminding everyone what it is that pulses through the beating heart of Toryism, and boy, that sticky, foul-smelling ooze is people like you.

Although for the sake of accuracy, you should always preface her name with the term ‘soiled Murdoch puppet,’ so that it’s 100% clear to everyone why she’s no longer an actual MP herself.

Despite having received support from Louise Mensch, it may not all be plain sailing ahead for Hunt. Especially as many of the people who have made it their mission to remove Jeremy’s fingers from the ship’s wheel are highly trained surgeons.