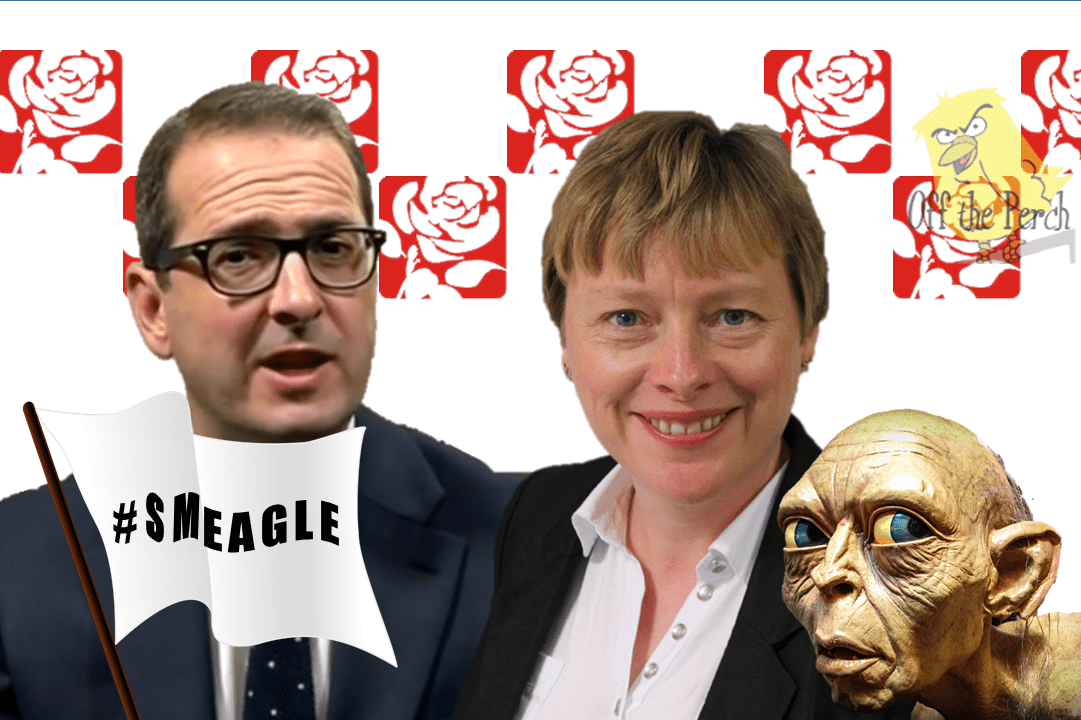 A furious row has broken out among Labour party figures orchestrating the challenge to Jeremy Corbyn’s leadership. Off The Perch understands there was “blood on the carpet” at Progress HQ after strategists facilitated a workshop on the branding for the anti-Corbyn campaign.

We spoke to a Progress intern who was in charge of the flipchart at the meeting. To protect her identity, her words have been typed by an actor:

We started by looking to the Brexit campaign for inspiration. It’s pretty obvious that they won because they invented a new word that everyone hated but couldn’t stop using. And it’s a portmanteau – two words mangled together – which is so totally now.

So we asked ourselves how we could combine Owen and Angela. We wanted to use first names because that’s really kind of “Call me Dave” isn’t it? But “Owngela” just sounds rubbish, like Bonjella or something. I know it sounds a bit like Brangelina but I mean, come on, let’s keep it realistic. “Anwen” was nice and short and easy but someone – THANK GOD – pointed out that it’s not far off “Aneurin” and the last thing we need to be doing is reminding people that there was a time when the Labour party was run by left-wingers.

So then we looked at the surnames. “Eaglith” is probably already a Game of Thrones character so we couldn’t risk that, and it sounds awkward anyway. “Smeagle” just rolls off the tongue. It puts “Smith” first, which is kind of what we’re trying to do in a subtle way, and it’s probably not a domain name or Twitter handle yet.

In fact we were just about to register smeagle.co.uk, because you have to get in early with these things, when some bloody know-it-all film buff at the back piped up that Smeagle sounds like Smeagol out of the Hobbit and that other film, Lord of the Rings. He said that people might get confused and think we were suggesting that Owen and Angela would be all ingratiating, pathetic and servile, willing to say absolutely anything to gain our trust. Or worse – that they might go all Gollum, knife us in our sleep, steal our bread and feed us to a giant spider. Those aren’t really the kind of images that we’re trying to create around Owen and Angela. So yes, there was quite a lot of shouting.

Off The Perch wanted to obtain a wider view but without compromising our source at Progress, so we met Momentum footsoldier Jez Wicken in an East End cycling café and enquired vaguely whether he ever felt a bit like a supporting character in a Tolkein novel.

It’s funny you should say that. I actually like to think of Corbyn as Frodo and John McDonnell as Samwise Gamgee. I’ve heard that Jeremy sometimes goes a bit googly-eyed and says things like: ‘I didn’t ask for this burden. It came to me and now I alone must bear it.’ And it’s common knowledge that if Jeremy ever gets so beaten down by the relentless abuse that he doesn’t feel up to riding his bike, McDonnell has said he’ll personally give him a fireman’s lift from Islington to Westminster.