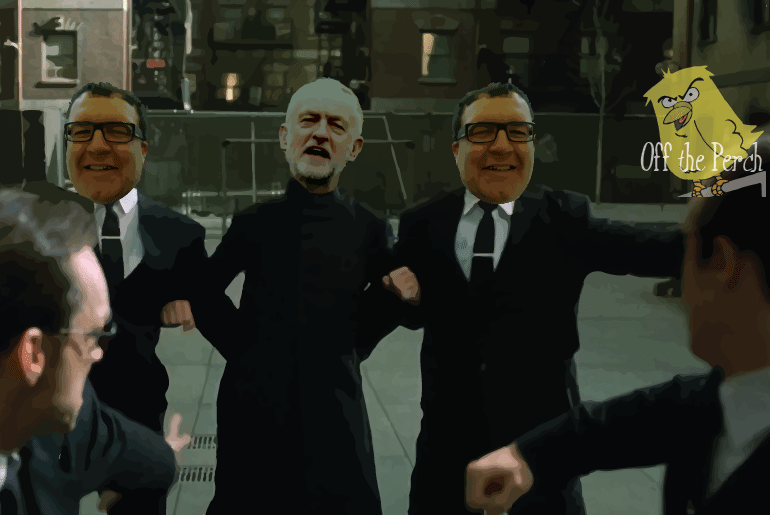 Twitter was alight yesterday with claims that the group Saving Labour may have been illegally accessing the private information of lapsed Labour members. The reason why they’ve allegedly been perpetrating this potentially criminal action is that they want to give former members a chance to “save democracy” – namely because democracy is now something which must be saved at any and all costs – even if said cost is the complete and utter destruction of democracy.

Although these allegations are obviously more shocking than an electric eel blowing the 9/11 conspiracy wide open, Off the Perch can reveal that this rabbit hole goes even further than that – so far in fact that we feel obliged to offer you the following two options:

Although don’t actually click the second one. Just carry on reading. It’s red because the link is broken.

Anyway, we can now exclusively reveal that certain elements of the Labour party have been plotting to create a so-called ‘Democracy Matrix’.

The concept of this ‘Democracy Matrix’ is that once we’re plugged into the virtual world, we will see the world as the PLP do – meaning that the following ideas will finally begin to make sense:

Although we have no concrete evidence to support these claims, the plot does have all the trademarks of the Blairites’ typical #ChickenCoup shenanigans – namely that:

2.   It’s referencing something which hasn’t been popular since the late 90s.

3.   It involves stabbing people in the back – albeit this time with a person-to-matrix USB lead rather than a metaphorical dagger.

Although the Labour party has refused to comment on the allegations, Hilary Benn was spotted earlier this morning wearing a leather trench coat and typing out Twitter ripostes in bullet time.

If you yourself are worried about the inevitable privacy breaches that would result from being forcibly logged in to the matrix, please be assured that the people behind this plot are struggling to pull off their socks every night – let alone pull off a scheme so advanced that it would make cold fusion look like an electric eel hooked up to a toaster.