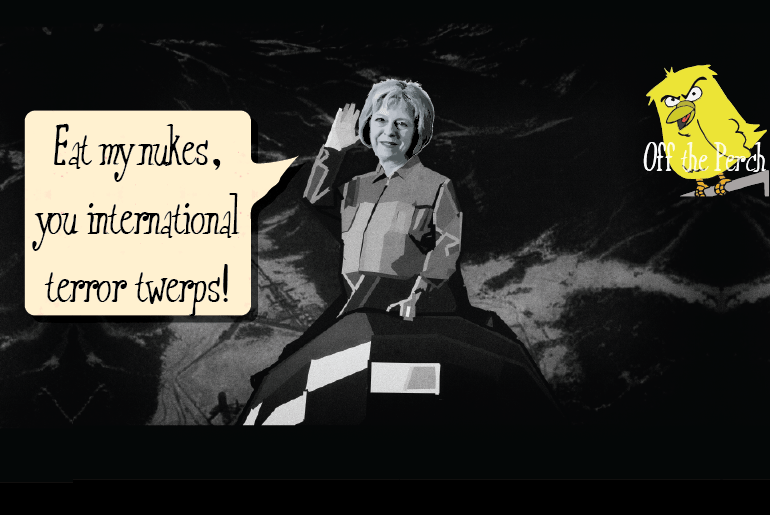 With the renewal of Trident having always been more likely than this heat-wave lasting longer than two days, global safety experts have upgraded our security level to AF – the second highest level there is after ON FLEEK.

Although we were nuclear-capable beforehand, our WMD’s were a little bit Pound-Stretcher, and as such our enemies were more than happy to mug us off at every available opportunity – much like schoolyard bullies mugging off a nuclear-capable dweeb because he turned up to school wearing Nicks trainers and a bowl cut.

To prove that we’ve earned our AF security rating, we spoke to some of our greatest enemies to find out exactly how seriously the world will henceforth be taking us.

When I was preparing plans to assassinate Alexander Litvinenko with radioactive badness in 2006, one of my generals said, ‘but boss, don’t the UK have nuclear missiles?’ Are you kidding me – I said? Their deterrent is so old that their submarines probably have disco balls instead of modern halogen lighting.

Now that Great Britain will have a more up-to-date weapon of mass destruction, however, I will obviously have to think twice before blatantly killing people on your soil –  leaving a trail of radiation all the way to Moscow. I will maybe even have to think about it three times.

Some have suggested four, but no. No I do not think so.

The lack of f*cks Theresa May has for the thought of nuking hundreds of thousands of innocent people to death has really given us pause for thought.

I mean sure – most of us are psychotic, barbarous killers – but even we sometimes stop to think, ‘bro, WTF am I even?

Your Prime Minister, on the other hand, has clearly learned to stop worrying and love the bomb.

Your courageous dedication towards failed foreign policy has revealed your true character, and as a testament to your political excellence we will be abandoning our Axis of Evil shtick ASAP.

We have also sent you all a gift hamper in the post by ways of apology. Be sure to try the Lush foot scrub; it’s heavenly.

Although renewing Trident is obviously a super-cool idea with no obvious downsides, there are also reports coming in that there may have been a more pressing reasons for the Prime Minister to force through an upgrade:

Because obviously replacing Boris with someone who doesn’t inspire nuclear reprisals is completely out of the question, because…

I’VE EITHER GONE COMPLETELY MAD, OR EVERYONE ELSE HAS!