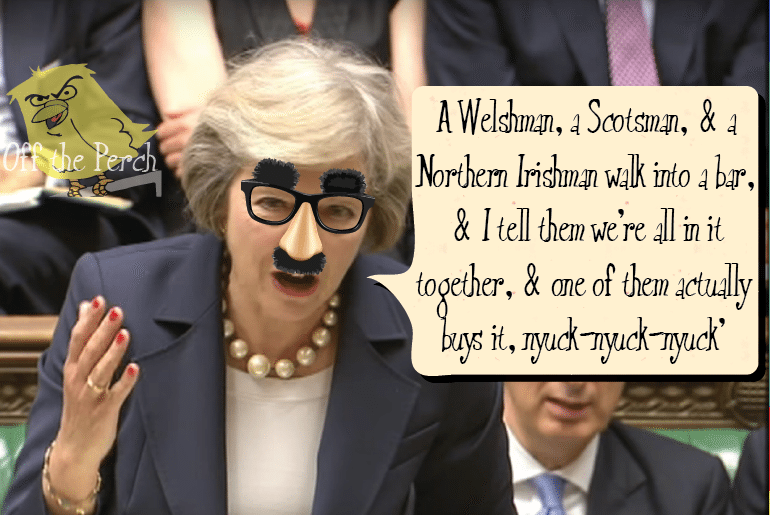 When Theresa May was coronated, many people were worried about how she’d behave as the UK’s accidental leader – namely because of her awful f*cking track record.

Thankfully, however, Ms May came out fighting, and heroically claimed that she’s actually in favour of the United Kingdom working for everyone – even those people she has historically worked tirelessly against.

The mainstream media (MSM) collectively sighed with relief at this pronouncement, because why would a politician lie about something so obviously important, and who are they to question what a Prime Minister says in public?

Since then, Theresa May has gone from strength-to-strength – most notably so when she made her first appearance on Mock the Week.

Or was it Prime Minster’s Questions?

Which is the topical news programme with all the gags and hooting laughter?

Anyway – whichever it was – Theresa showed the unflappability of Thatcher, the comic timing of Cameron, and the crooked-mouthed hostility of a tipsy Russian Empress – especially when she put that oik Corbyn in his place – saying that:

He calls it austerity. I call it living within our means. He talks about austerity, but it is actually about not saddling our children and grandchildren with debt.

A lesser woman may have balked at the fact that she was an integral part of the government which created more debt than every Labour government combined, but not this PM. Theresa knows in her heart-of-hearts* that Labour are the ones who are the debt-deniers, and she’s not afraid to shout about it. Or at least not for as long as the MSM are happy to repeat it anyway.

[*Although obviously we should point out that ‘heart-of-hearts’ is a metaphorical term, as we all know that the primary organs which Tories possess are actually best described as ‘bile sluices.’]

Theresa also went on to reiterate the heady claims that her appointment is a kick-in-the-shins for the British patriarchy:

In my years here in this house I’ve long heard the Labour party asking what the Conservative party does for women – well – *PAUSES FOR LAUGHTER – POSSIBLY IMITATES A GIBBON* – just keeps making us Prime Minister.

A lesser woman (ie all women) would have felt that her long career of being anti-people disqualifies her from being classed as a feminist – especially as 50% of all people are in fact women. She may also have found herself giving credence to those who said that a female Tory PM is as beneficial for all women as is a shark for all fish.

What’s already clear is that Prime Minister May isn’t afraid to speak the hard truths – even if said hard truths are neither particularly true nor hard to profess – essentially as they’re all just slightly reworded versions of the rarely-challenged guff that Cameron spouted.

Whether she’ll be as successful as Cameron or Thatcher remains to be seen, however, as although they collectively set the bar so low that you could use it for a pixies’ pole-vaulting competition, I think that we are all now slowly coming to appreciate that things can always – always – get worse.