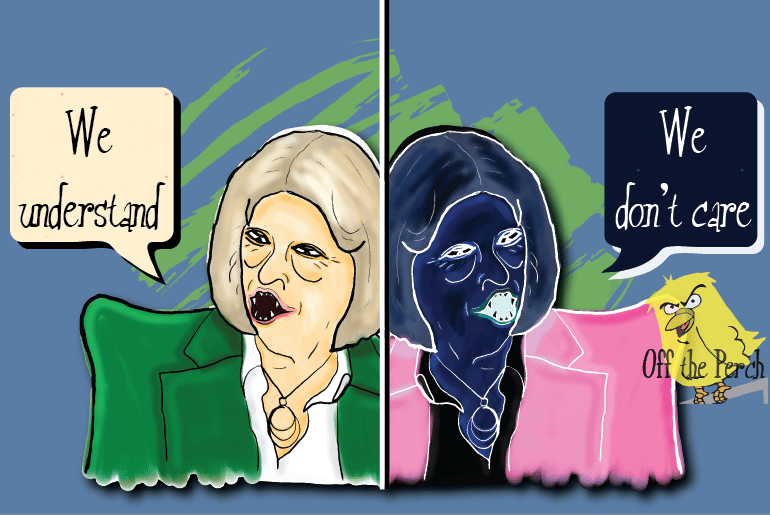 At this point, it has been well established that the Conservative party lies. In fact, it’s probably their second most identifiable characteristic after being nasty.

Some people were tricked into thinking they didn’t lie in the run up to the last General Election, but in actuality it transpired that when they said they were telling the truth, that that was the biggest lie of them all.

The thing about compulsive liars is that their dedication to duplicity is such an assault on the senses that it can wear down the defences of even the best of us. With this in mind, we’ve compiled a handy list of Tory doublespeak definitions to help voters better weather their barrage of bullsh*t in future:

BETTER TOGETHER = better for us.

WORKING WITH THE PRIVATE SECTOR = working for the private sector.

WE’RE ALL IN THIS TOGETHER = technically accurate, although by ‘this’ they mean ‘increasingly disparate dystopia.’

IMMIGRATION = An issue which the Tories turned into political fire – fire which they thought they were juggling, but were actually just tossing about the place like Molotov cocktails.

COMPASSIONATE CONSERVATIVE = a Tory who listens to their spin-doctor and lies about their intentions/values/feelings to other people.

WE UNDERSTAND = we don’t care.

BRITISH VALUES = the historical proclivity for people in this country to be swept along by the rousing tornado of imperialist hot air.

BUILDING A STRONGER BRITAIN = reverting back to the work ethic of the Victorian Era.

LIVING WAGE = as long your idea of “living” includes poverty and occasional hunger.

PROUD TO BE BRITISH = happy to benefit from the misfortune of British people.

CUTTING THE DEFICIT = doubling the deficit.

TACKLING CRIME = laying off officers, fudging statistics, blaming the police themselves, and then selling off contracts to G4S – i.e. the incompetent company to which Empress May seems surprisingly keen on awarding contracts.

GETTING PEOPLE BACK TO WORK = forcing people into the sort of work contracts which would cause the French to revolt so hard it would make their former revolutions look like a children’s production of Les Miserables.

EXTREMISTS = anyone who opposes their rights to terrorise.

DON’T WANT TO MAKE PROMISES WE CAN’T KEEP = “but if we told you what we actually had planned, we’d never get elected.”

THREAT TO NATIONAL SECURITY = threat to the Conservative party and its backers.

DAMIAN GREEN, SECRETARY OF STATE FOR WORK AND PENSIONS = grimy reaper in training.

DAVID DAVIS, SECRETARY OF STATE FOR EXITING THE EUROPEAN UNION = man in charge of telling the corrupt EU that they need to give us a better deal now that we’ve betrayed them.

DAVID CAMERON, FORMER PRIME MINISTER = ex-manager of dodgy Dave’s discount infrastructure basement – Hurry up! Everything must go before the next general election!