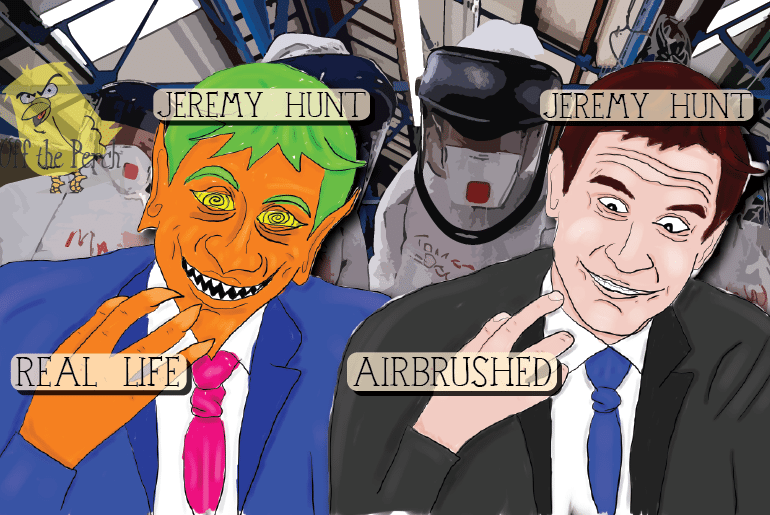 Following claims that the Department of Health (DoH) knowingly “airbrushed” weekend death rates in order to bludgeon through “plans” for a 7-day week, the government is now also facing allegations that they’ve been face-painting Jeremy Hunt to make him look vaguely human.

To find out what’s going on, we approached an NHS whistleblower. Unfortunately, it turned out that this ‘whistleblower’ was just a junior minister who plays tin whistle in an Irish folk band at weekends.

They were open to the idea of our reporter getting them sh*t-faced, though, and as soon as they were drunk enough, they began to spill the government’s terrible, terrible beans:

When we decided that we wanted to cripple the NHS, the obvious way of doing so was to make doctors work the sort of hours that would trouble an amphetamine-addicted vampire. Beyond the initial deterioration that would inevitably ensue from professionals being so tired that they literally couldn’t tell an arse from an elbow, it was also predicted that more and more staff would choose to practise abroad.

This would be damaging enough, but the overall plan was to combine the scheme with two others. The first was to make it so difficult for Brits to train as medical professionals that the only people who’d put themselves through it would be sadomasochists, ‘angel of death’ serial killers, and those with an irrational and insatiable OCD to help people in need.

The second was to deter foreign professionals from coming over here – namely by doing things like framing referendums on how much we hate immigrants and driving vans around London with messages like: ‘Have you thought about f*cking off back to where you came from?‘

What we needed was someone who could pilot this departmental nosedive without bottling it and pulling up at the last second. In other words, we needed the sort of person who thrives on the revulsion of others – like a caterpillar that feeds on misery, cocoons itself in a chrysalis of hatred, and then metamorphoses into a butterfly of loathing.

The obvious choice was Iain Duncan Smith, but even he wasn’t interested. He said that although he had no problem with culling poor, disabled, and young people, he had no real interest in random and indiscriminate murder – which is essentially what these changes would be risking.

When the search for an MP willing to act as a societal hate-magnet bore less fruit than a Chernobyl potato farm, the think-tank RICH-BAST suggested that we employ an actual, honest-to-goodness troll.

Finding that person was easy enough, as they all hang out in internet cafés below London Bridge – pretending #GamerGate is a serious thing and calling on Twitter to #FreeMilo.

The problem, obviously, is that the troll we eventually picked was a twisted, goblin-faced horror – in complete contrast to the chinless, inbred terrors who usually work in government.

To counteract this, we’ve employed a team of top Hollywood makeup artists to reverse ‘Pan’s Labyrinth’ him. We feel that it’s a pretty good deal too, and the fact that the makeup expenses tally exactly with what we’ve cut from the NHS is purely coincidental.

Although it’s unusual for an actual troll to be employed as a governmental minister, the Tories are keen to stress that non-humans have held public office before, the most prominent cases being: