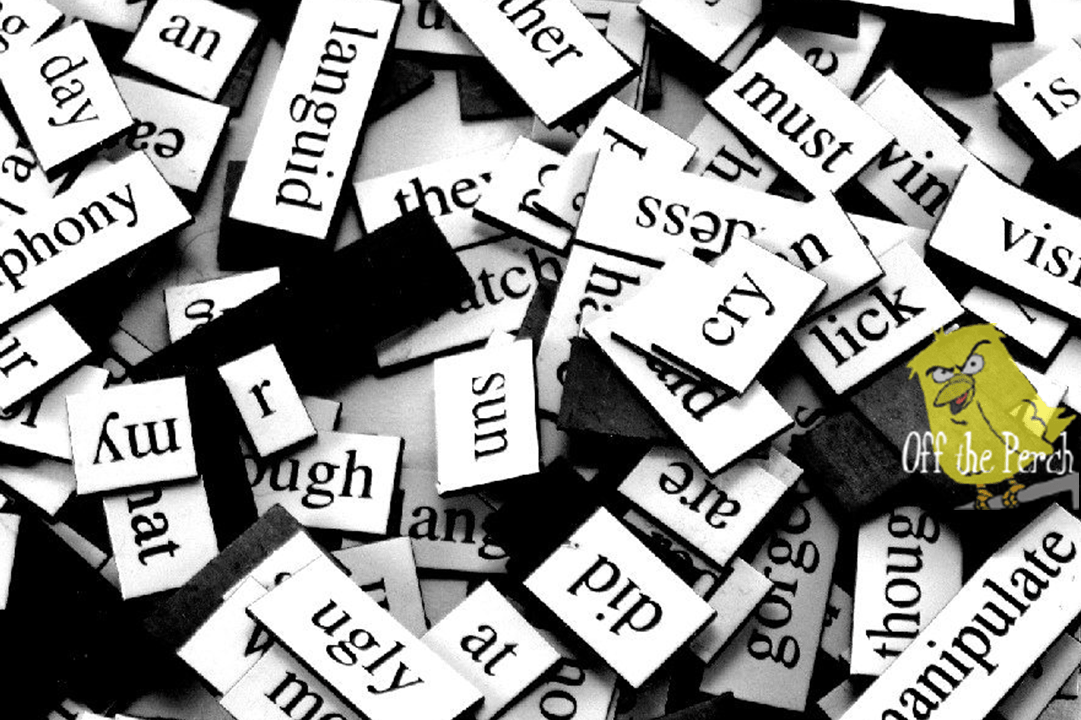 I love the English language. From the most brutal and guttural expletives to the most scientific and multi-syllabic technical terminology, English has an incredibly rich tapestry of descriptive capabilities. There are simply so many ways to say the same thing!

With roots in Germanic, then in French and Latin (following the Norman Conquest of 1066), English has drawn on words and phrases from many regions of Europe. Add to that its incomparable ability to absorb and accommodate foreign phrases and words, not to mention colloquialisms and those created by popular culture, and it’s hardly surprising that English is widely considered to contain more than any other language. It’s a veritable melting pot of linguistic legacies. (High five for that one please!)

When joining The Canary, I set up a writer profile including reference to:

an unencumbered press that doesn’t always tow the line.

I didn’t think twice about it.

Fast-forward a couple of weeks, and a schoolteacher from Australia named Fran politely pointed out on Twitter that I’d made an error in my use of that phrase, saying it should in fact have been:

I’m a bit of a despot when it comes to spelling, grammar etc. Errors irritate me. I pride myself on having a fairly rigorous eye for written accuracy. So for me, it was a humbling ordeal. (Not to mention, let’s face it – a writer posting a spelling mistake on his/her own profile, is a bit like someone claiming to be a deep sea diver, inadvertently mentioning they can’t swim. Mortifying.)

Curious to know how I’d made the mistake, I looked into the background.

I’d always imagined the ‘line’ referred to a rope (or similar) ‘towing’ a load. That seemed to make sense with the implication, too, but the origin is more specific. Some dispute whether it originated in the House of Commons, the armed forces, or (which seems most likely) British public schools as Fran suggests, but either way the phrase references an instruction for others to line up, precisely and orderly, with their ‘toes’ touching the line.

Maybe I need to get out more, but I did find that fascinating.

As I did the fact that such a mistake is known as an ‘eggcorn‘:

a word or phrase that results from a mishearing or misinterpretation of another, an element of the original being substituted for one which sounds very similar.

In fact, the phrase ‘toe the line’ is given as the very example of an ‘eggcorn’ in various online dictionaries.

Keen to turn this embarrassing mistake into a learning opportunity, I looked into a few more well known and often misspelled phrases. I thought they might be fun to share. Who needs Netflix, eh?

Comes from the tradition in the House of Commons of showing approval for a speaker. It was basically saying ‘hear him, hear him’, and today is used as a similar demonstration of approval/agreement. (Not an instruction to move to a specific location, as ‘here’ would imply.)

I once heard a comedian joke there’d been some confusion and misunderstanding of this Second Amendment to the United States Constitution because, at the time, ‘bear arms’ were actually a delicacy, and there were never enough to go round. On the other hand, they weren’t much good in a duel.

But the phrase is definitely not a demand of the people to wear vests, or any other sleeveless item of clothing for that matter. Nothing to do with ‘bare arms’.

First recorded in England in the 14th century, the phrase refers to the right to ‘bear’ (have/hold) instruments of bodily harm. (So today, that might include things like a James Blunt album.)

In fairness, this is another one that kind of makes sense in its incorrect format. To think it means something has ascended to the ‘peak’ of your interest (like the peak of a mountain) is not outlandish. The word ‘peek’, to subversively look, makes no sense at all. But the actual verb used in this phrase is ‘pique’ – to stimulate or arouse. (But this being English, of course, ‘pique’ means something completely different when it’s a noun – a state of irritation.)

A phrase originating from the world of magic and illusion, ‘sleight’ is a synonym for dexterity or cunning. The verb ‘to slight’, on the other hand, means to insult, and the adjective refers to size or proportion.

5. Wait with bated breath (not ‘baited’)

‘Bated’ means to be in a state of suspense, anticipation or anxiety. ‘Baiting’ is what you do to a fish or, if you’re ridiculously dressed, have a death wish, and happen to be a celebrity in Spain, a bull.

In contrast to the English language’s often confusing habit of having a word spelled the same but with different meanings like ‘pique’ (homonyms), occasionally it’ll throw us an easier way of determining – at least for reading, if not hearing. These are called homophones (a word which would only require one mistaken auto-correct to imply something rather different). They sound the same but look different.

Rein/reign/rain are homophones. A rein is the thing attached to a horse’s bit, hence the phrase in question. Though again, there is also lateral thinking behind the common misspelling, because the implication of ‘reining in’ is fairly comparable to ‘reigning over’.

Most people probably realise this phrase has nothing to do with what Jack and Jill fetched from ‘up the hill’. Nope, it is not an aged phrase concerning a bucket.

Unless you’re commenting on a friend’s absence of skin pigmentation, or their ghastly choice of wallpaper, then the ‘pale’ probably doesn’t refer to what some might guess it does, either. It actually refers to a boundary of sharp stakes implemented by the English in occupied Ireland during the 14th century.

8. The stationery cupboard (not ‘stationary’)

Ok, so in the very likely event you’re not directing the office clerk to look in a cupboard being magically levitated round the room Harry Potter style, and all you want is a stapler from the regular one sitting in the corner, the spelling is ‘stationery’. I admit, I didn’t know this one either!

This one is about as pedantic as you get, to be fair. In our second horse-related reference on this list, the term is technically spelled/pronounced as ‘champ’ or ‘champing’. This is what a horse generally does, and has a meaning that’s crossed over to describe human agitation. But considering that ‘chomping’ has come to mean exactly the same thing as what a horse does, i.e. to bite or chew noisily, it is no wonder the incorrect spelling is used more commonly than the correct one. As with many deviations from British English, we have the Americans to thank…

This one is my favourite, simply because it’s the best example of the English language being a completely facetious b*stard.

Again, the commonly misspelled/misquoted version using ‘mute’ makes sense. If you suggest someone’s making a ‘mute’ point, it implies it’s silent and pointless. And that’s very similar to ‘moot’, which can mean ‘having little or no practical relevance‘.

A lighthearted quip from my editor gave me cause to formally look up the word ‘moot’. As it turns out (and to my disbelief), apart from meaning something is essentially not worth discussing, the adjective ‘moot’ can also mean ‘open to discussion’. Which is literally just about the carbon opposite. How the bloomin’ heck are you supposed to decipher which is inferred, when there’s no difference in spelling, pronunciation, or use in context?

Fortunately, it also meant my editor was encouraging me – and I didn’t need to pack up my desk just yet.

I hope you, dear reader, found all this vaguely amusing and/or enlightening.

Do look out for my future articles: Sexy men use punctuation correctly and The woodsman’s guide to onomatopoeia.