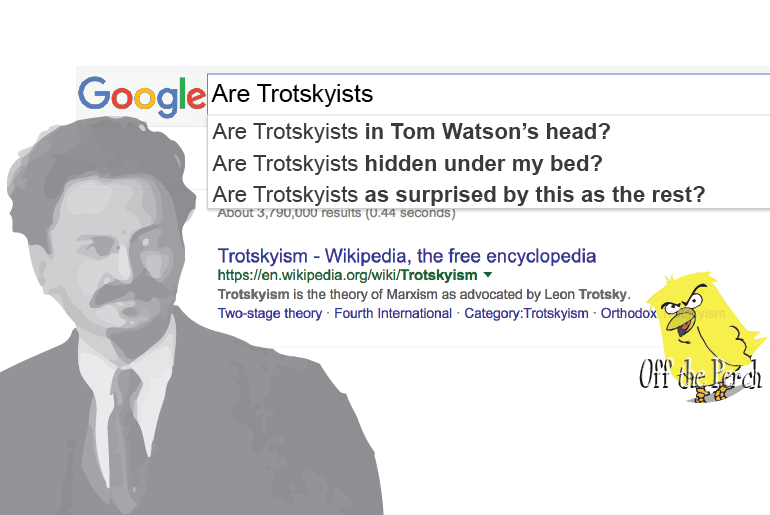 The top term searched for by Google users in the UK this week is ‘Trotskyite’, after the Deputy Leader of the Labour Party spread a conspiracy theory that the party is being infiltrated by them. Incidentally, the second highest ranked search was ‘who on earth is Tom Watson?’

According to Watson, the 600,000 members of the Labour Party are some sort of rapidly multiplying herd of ‘Trotskyite’ militants. While the fringe left parties he claims they come from couldn’t fill a cruise ship, Watson argues they somehow managed to rope in 597,000 sympathisers to join the Labour Party with the express aim of – as one Telegraph pundit put it – “trashing the place“. How was this takeover executed? By deploying ‘arm-twisting’ techniques on young people.

Sadly, this is not the satirical element of this story. That sh*t really happened. He even sent a dossier full of myth and mendacity to Corbyn on the matter. Given the involvement of PR company Portland Communications (which claims former New Labour spin doctor Alastair Campbell as a senior advisor) in the coup, one would think ‘dodgy dossiers‘ would be avoided altogether.

The media, rather than denouncing these false claims as the biggest streak of nonsense smeared on UK politics since William Hague’s ‘24 hours to save the pound‘ bus tour, lapped it up like starving dung beetles. This is how The Guardian covered the situation… on the front page no less. 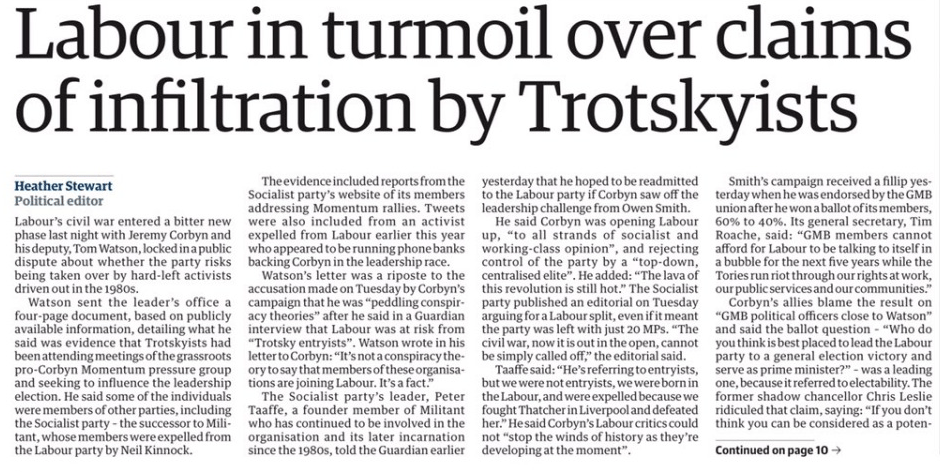 [Editor’s Note: Ok, so here is the satire bit… seriously, that was all true]

With the public whipped up into a paranoid terror over these infiltrating ‘Trotskyites’ – millions swarmed Google for an answer. Who are these people? Where did they come from? What do they eat?

The panic was so profound that Google actually suffered an outage for more than an hour, after their ordinarily bullet-proof servers failed to cope with the level of traffic. A spokesperson for the tech leaders told Off The Perch:

Nothing on this scale has happened in our company’s history.

Perhaps if Google had been around during the McCarthy era, or the Salem witch hunts, we might have been able to use that experience to make a difference here.

But we are ill-equipped – as children of the information age – to deal with the entire mainstream media and political class opting to spread this amount of horsesh*t simultaneously. We’re out of our depth.

Off The Perch did contact Tom Watson’s office for comment. But we were told that due to a shortage of tin foil (generated by the rush), Mr Watson felt he would be unsafe allowing our words to filter into his unguarded brain.

If you are concerned that you, or something you care about, has been infiltrated by ‘Trotskyite’ tendencies, then please take Tom Watson’s online quiz to find out.