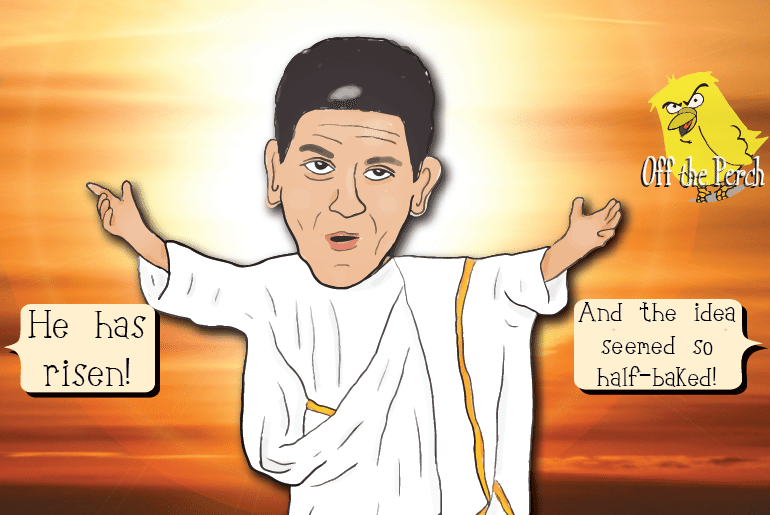 If you’re unfamiliar with David, he essentially looks like a child’s drawing of Tony Blair that’s been repeatedly photocopied until the definition has bleached out. In fact, the queasy feeling of facsimile that clings to him is so strong that many believe he was part of a New Labour cloning programme, which was enacted to ensure their politicians lacked:

As in the man whose political legacy is that he bought a big stone onto which he inscribed the legacy:

After being bested by his brother, David was so torn that his feelings ripped a hole in the fabric of reality. He was sucked through this schism in existence to a parallel universe where everybody loved him. It was a magical place where the internet had never been invented, so New Labour’s dark arts of drip-feeding the media sugar-coated bullsh*t never grew old. And it never became so ineffective that the practice would ultimately be received as a political turn-off greater than Gordon Brown wearing nothing but socks and a forced-smile.

Although David was gone, the heart of the New Labour machine never forgot him, and they could feel his lifeless, waxwork-shark eyes staring out from the blackness of the void. The thing about David – they’d tell themselves – is that he’s electable.

The notion of this electability is confusing, as the public literally rejected the New Labour ideals he embodies in two separate elections.

What electability seems to mean to these people is that they personally would vote for him. And the reason why they personally would vote for him is that politicians like David Miliband and Owen Smith understand how to do what’s best for the party. And by best for the party, they obviously mean what’s best for the people who own the party. Although instead of saying own the party, I should probably say support the party financially. And yet seeing as how these backers are able to compare the leader and members to the Third Reich with impunity, the façade that they aren’t in charge is a flimsy one at best.

Although David himself is denying he will return, that will almost certainly change if the public clamour for him to do so reaches a fever pitch.

Which is of course to say that he’ll be staying where he is – out there – in the distant reaches of the collective New Labour hallucination.