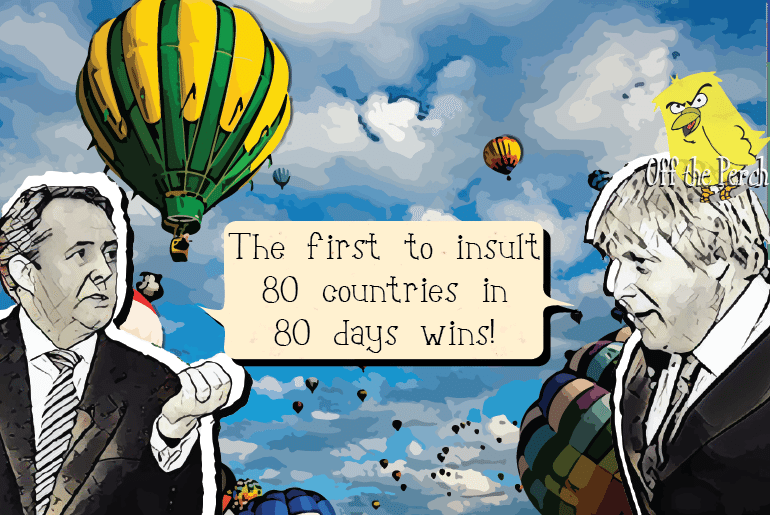 It was always expected that there would be tension between David Davis, Liam Fox, and Boris Johnson – the ministers who Theresa May appointed to clean up the mess that they…

…that is to say the ministers that she appointed to oversee Brexit, foreign trade, and whatever it is that Boris thinks he’s doing.

Despite the fact that these are largely awful men who would probably struggle to get along with themselves, the PM decided to stick them all in the same mansion together – which to the over-privileged sensibilities of a Tory big beast is a situation more demeaning than that of being a battery farmed gammon-hog.

The first row has broken out much more quickly than anyone could have anticipated, however, with Fox demanding that he is given all of the good jobs so that Boris can focus on ensuring MI6 don’t drop the ball with the next 007 movie.

To settle the dispute, the gentlemen have decided to compete in an around-the-world balloon race. The aim is to insult 80 countries in 80 days, although bonus points will also be awarded for:

Although Theresa May is said to be “sick to her stomach with the antics of these mash-brained tripe-bags”, she is unfortunately treading water in a very shallow pool of talent. It’s also the case that the trio were the only three patriotic enough not to laugh themselves into a very painful hernia when being offered the job.

Regardless of who comes out on top, however, we should rest assured that the responsibility of carrying out our weightiest decision since The Battle of Britpop is being carried out by such credible and responsible politicians.