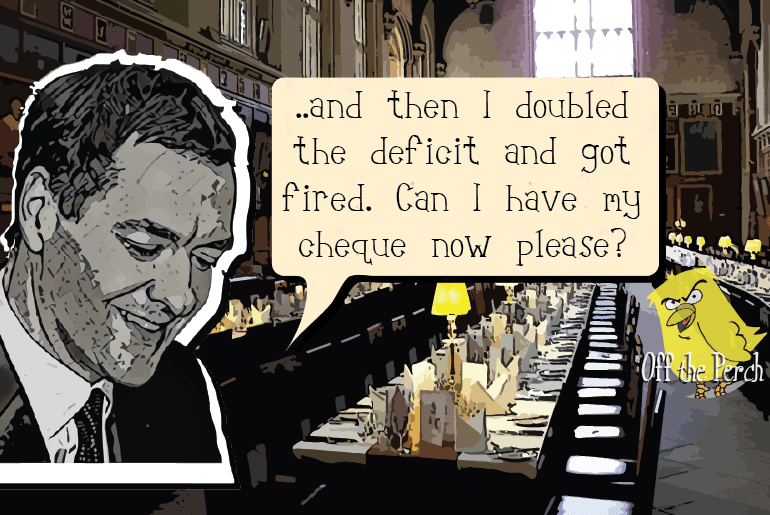 When the anti-Brexit boat that Osborne had limply nailed his colours to capsized, most assumed his career was shipwrecked – doomed to spend eternity as well-remembered as the many sea vessels which weren’t the Titanic.

But others claim it’s unlikely that Gideon will be forgotten, because he is set to go down in history as the most incompetent British chancellor ever. Partially, this is because he espoused a theory of economic recovery so historically debunked that there are cave paintings advising against it. Equally, it’s that he had the appearance, mannerisms, and wits of a chirpy, cult-movie drug addict.

Yet others have decided that Mr Osborne did a fantastic job, and these are the people who run the world famous AFTER DINNER CIRCUIT OF EVIL.

The circuit is a place where the vile and rich can get together to hear tales of villainy from the equally vile and rich. Current villains on the books include:

Although unconfirmed, it’s also rumoured that the club holds secret suppers where you can hear speakers such as:

At this point, it’s widespread knowledge that Osborne failed both by his own illiterate standards and those of everybody else. But like a true scoundrel, Gideon never stopped telling people that he was actually doing a very good job. And it’s exactly this sort of bare-faced skullduggery that the diners will be excited to hear about.

Of course, there are also those who believe that the only after-dinner speaking George Osborne should be doing is in an ironic ‘austerity prison’ where he is never given enough to eat, and therefore has to ask:

Please sir, may I have some more?

But unfortunately the reality is that, for the 1% of this world, no great failure goes uncompensated.