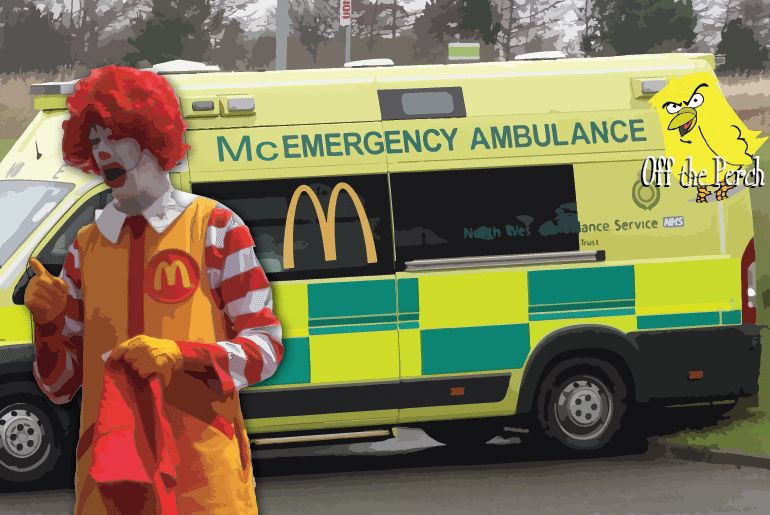 Months after McDonald’s unveiled their plans for a ‘McNHS’ healthcare subsidiary, Off The Perch can reveal that the fast food giant has been awarded the contract to run Sheffield’s Shafted Heart Healthcare Trust.

The trust, which runs Sheffield’s five hospitals, will be taken over by McDonald’s in October.

McNHS plans to introduce widespread charges for services that are currently free at the point of use. The company argues that special health package offers will balance the load. Spokesperson Robinia Blind told Off The Perch:

It’s really the most exciting thing to happen to the NHS since it was founded. We plan to bring the spirit of a McDonald’s restaurant into the British health service.

For example, for every three McBypasses or McHernias, McNHS will give you the fourth absolutely free. It really is a heck of a deal.

McNHS plans to put the entire workforce of the trust – including doctors, nurses, and surgical staff – on zero hours contracts to ensure maximum flexibility for the company. Ms Blind said of the plans:

McNHS staff will be required to be the kind of team players you see in your local drive thru. The days of doctors and nurses trotting about with the diva-style behaviour of celebrities is over. It’s all about the patients for us.

Off The Perch asked Ms Blind if McNHS had considered the impact on patients of having to pay for previously free services, and the impact of the expected mass walkouts by professional staff.

McNHS has staff all over the world ready to fly into England, or Wales or wherever, and do these jobs at the drop of a hat. So there’ll be no disruption of service. We need to stop thinking of health like some special science, and more like a basic production line. In, fixed, out, next.

And as for paying – well it’s about time. The profit-making capability of healthcare has been overlooked by Britain since the Second World War. You became world leaders in giving stuff away for free while American healthcare companies cleaned up. If Britain wants to compete on the world stage, it has to get real.

McNHS appeared most proud of its plans to serve exclusively McDonald’s menus to McNHS patients, including post-surgery Happy Meals at the Children’s Hospital.

Imagine this. Your little girl is fresh out of a life-or-death surgery, and there waiting for her is a patty slapped between two buns, accompanied by a stack of fries! Then when she’s done powering up on the trans-fats, she can play with her cutesy little toy thing. Melts the heart, does it not?

Bob Macclesfield, a union rep for staff at the Shafted Heart Health Trust told Off The Perch:

It’s game over. Have you heard this sh*t? Seriously, it’s like it came straight from the sick mind of some satirist somewhere. We’re all out. I’m retraining as a personal trainer and to hell with all this crap. We’re off. Good luck Britain. Just don’t go getting sick will you? Or you’re terminally f*cked now!

Mr Macclesfield then spat at the feet of McNHS spokesperson Robinia Blind, before being wrestled to the floor by her security team and promptly removed. We have been unable to trace him since. Blind, however, concluded:

Sheffield is just the start. We have bids in for London, Bristol, Manchester, Birmingham, Glasgow, Cardiff – all over the place. McNHS is coming to a town like yours very soon!