Tories unveil plan to tackle the environment - The Canary 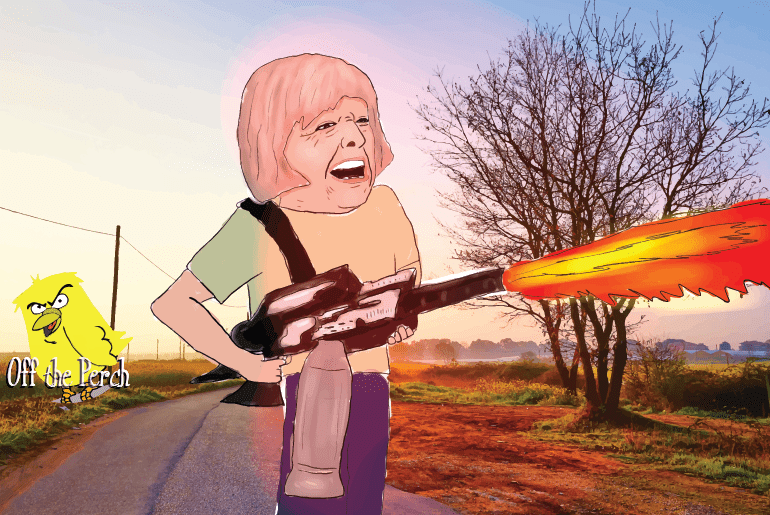 Theresa May made it clear on 26 August that, under her government, the Tories will tackle the environment once and for all. Some of the journalists she spoke to assumed she meant ‘tackle climate change’ or ‘tackle pollution’, but as she laid out her plans, it became increasingly clear this wasn’t the case.

The three-point plan has now been released to the public, and a summary of each step can be read below.

It’s the opinion of the Conservative government that currently we have too much environment. They also believe what we do have is spread across too wide an area. Although it can be nice to have a bit of environment for walking about in and such, it’s ultimately very difficult to manage when it’s spread all over the country like an untimely-dropped flan.

Their plan going forwards is to concentrate the environment in the south of Britain – having picked this region out of a hat for the sake of fairness. Or at least that’s what they claimed they did anyway – in between bursts of laughter which they assured us were unrelated.

The rest of the UK’s environment will be converted to things that are cheaper to manage – like fracking sites, multi-storey car parks, and emergency housing for foreign oligarchs. They say ‘cheaper’ to manage because privatising something doesn’t actually mean that we ever have to stop funding it.

For too long, we have been a passively tolerant element of the food chain, saying to other animals that just because they’re not trying to eat us, we will let them live.

The Tories have turned this around in recent years with their expensive, ineffective, and ultimately ludicrous efforts to assassinate badgers, buzzards, and foxes. These schemes are to be extended now, and anyone who delivers the scalp of a rare or beautiful animal to their local council will be given ten guineas and a signed photograph of Prince Charles in his hunting Speedos.

If Jurassic Park has taught us anything, it’s that life will find a way. Theresa May has shown her dedication to putting an end to life once and for all, though – namely by scrapping the Department for Energy and Climate Change.

By bowing out of our commitment to not turn the planet into a bargain-festival rent-a-sh*tter, we can truly guarantee that Great Britain will have no environment to worry about for generations to come.

We may even experience some prolonged periods of sunshine – especially after the clouds catch fire and burn a hole in that pesky ozone layer.

Although sacrificing the environment to strengthen the economy is as practical as punching yourself in the crotch to pump up your biceps, this does seem to be the approach that the government is set upon.

Weirdly, however, the people who live in the bit of the country that loves to shoot nature in the face are the ones who keep voting Conservative. They’re also the ones who are coincidentally being spared from the corporate flatulence of fracking.

Our only hope now is that nature truly does find a way, and that the cabinet is overrun by velociraptors.

Or – at the very least – irate and copious hedgehogs.