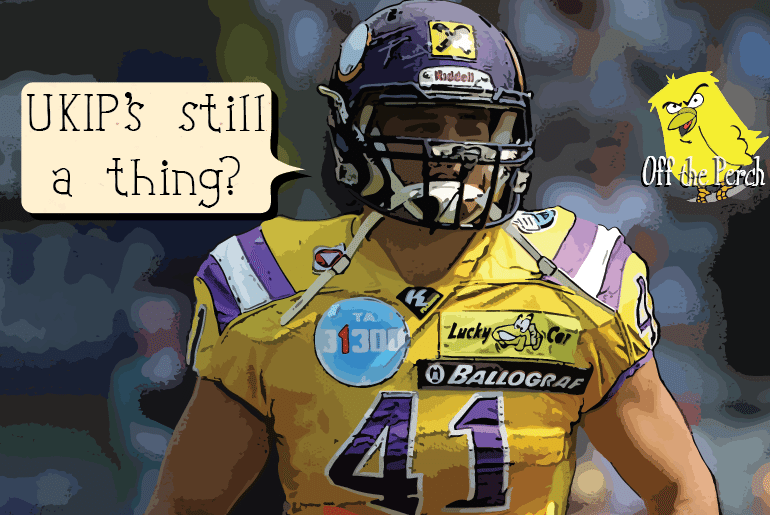 UKIP has been somewhat on the ropes since the EU Referendum, as Nigel Farage has failed to reinstate himself as leader, and his potential replacements have failed to inspire anything other than a confused look – usually followed by the question:

One potential UKIP leader has now managed to make a name for himself, however, with a policy so popular that it’s uniting people more efficiently than a super glue-coated kitten.

We spoke to the gentleman in question – one Enoch Malfoy – to find out about his plan to rename American Football ‘Crown Traitor Health & Safety Rugby’:

What Nigel realised is that once people get over their need to be politically correct, the heady thrill of scapegoating minorities is like a drug. It reached a peak with the EU Referendum, though, and now we’re worried that people will start to come down and feel a bit queasy with it all. They may even realise that the ‘wonderful’ drug we sold them is laced with laxatives, false promises, and bad intentions.

This means we need to tap into new markets – to reach out to people who have previously seen themselves as being too good for racism. The problem is getting them to abandon their common sense, decency, morals, ability to comprehend economics, and memory of what historically happens when personality c*nts get into power.

The plan is to get them hooked with a little bit of gateway racism, and then slowly start transitioning them to the hard stuff later on. You see, no one has a problem with being racist against Americans, because they’re basically just a slightly more crass version of ourselves. Or at least they were before the Brexit campaign anyway, when we somehow managed to out-Trump Trump.

The genius part is mixing the health and safety angle in, as it’s a proven fact that Jonny Average would prejudice a thousand minorities in a heartbeat if he thought his right to tell sexist jokes whilst drunkenly clambering up an untethered ladder was at risk.

So far, the new policy has been one of UKIP’s most popular ideas yet, and they have already announced several follow-up proposals, including: