"It's our job to build on Voldemort's policies", claims Harry Potter in new book - Canary 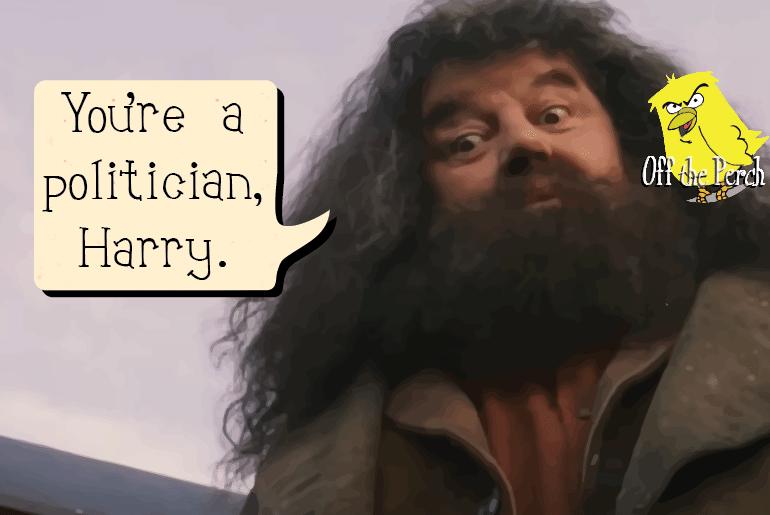 J.K. Rowling has announced a surprising 8th entry into the Harry Potter franchise today – a book which will be called Harry Potter and the Oil War of Moderation.

According to a source close to the author, Rowling wrote the new novel in one frantic, curse-muttering sitting. Allegedly, the purpose of it is to make the series more directly comparable to the arc of her beloved Tony Blair’s New Labour – namely so that she can, in her own words:

Prove once and for all that centrist philosophies are the Gryffindor of politics.

Quite how comparing real life to fictional tales of magic proves anything is unclear. But hey, it’s always worked for mainstream religion.

Unlike mainstream religion, however, Rowling isn’t forced into giving alternative readings of her own texts, and can actually just write further books to more explicitly prove her point.

This is good for her, as she previously had Dumbledore say things which didn’t really sound like they were describing people such as Tony Blair, David Miliband, Liz Kendall, or Owen Smith:

It is a curious thing, Harry, but perhaps those who are best suited to power are those who have never sought it. Those who, like you, have leadership thrust upon them, and take up the mantle because they must, and find to their own surprise that they wear it well.

The latest chapter in the Potter saga shows Harry taking a more pragmatic approach, as can be read in the following extract:

It’s our job now, Ron, to build on some of the policies that Voldemort implemented. I know that sounds bad, but that’s just how it is, sorry. We can’t undo the things he did, because that would take time and effort. And basically because I just don’t want to.

It’s also important that we reach out to all of the Death Eaters who supported Voldemort. I know that they’re a bunch of treacherous, child-eating psychopaths, but they’re also very rich, and if we allow them to carry on devouring infants unchecked, maybe they’ll give some of that cash to us. Cash which we can spend on the dark arts to cover up the fact that we’re taking cash from dark wizards.

I’ve also struck a deal with the owner of The Daily Prophet to see if we can get some good press. He said that we’ll have to hand Hermione over to him as a racy ritual sacrifice on the day of her 16th birthday, but in return for that, he’ll only try to undermine our leadership every other day.

Some of this may compromise our ability to get things done, but whenever the cracks show we’ll just blame it on the muggles, and hope that Owen Jones doesn’t write a bestselling book about the trick called Muggles.

Although that would be a very snappy title.

Have I ever told you that I’ve got a 29in wand?

We can also exclusively reveal the book’s ending and, as such, spoilerphobes should stop reading now.

You still with us?

Well, basically, Harry is dared into reading the Necronomicon by Buzz Lightyear, and as a result all of the demons of hell are unleashed upon the once great city of Agrabah.

Harry gets away with it though, because even though he knew his actions were evil, ill thought out, and unlikely to produce anything other than chaos, they were at least “done with the best intentions”.

And that makes it all okay, then.

Although – even for a fantasy novel – the logic seems incredibly far-fetched.