“So what do you think Brexit is?” the Minister for Brexit asks the public - The Canary 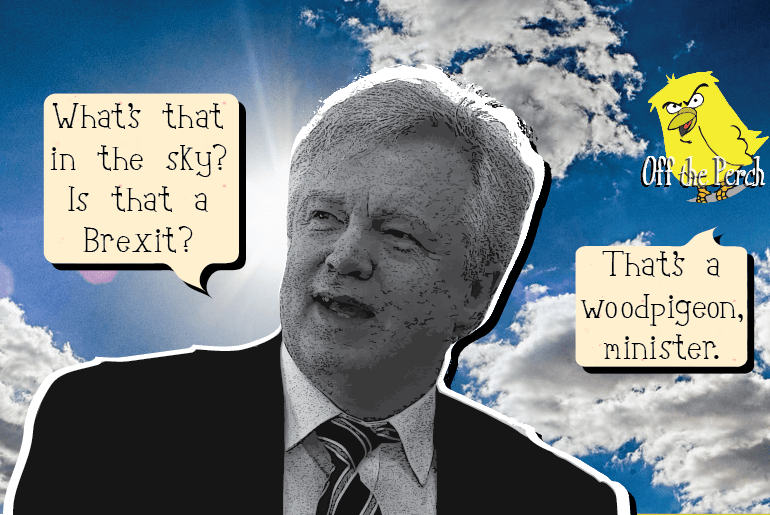 David Davis, the Minister for Brexit, has announced that when it comes to the issue he’s in charge of, the plan is:

To build a national consensus.

Davis followed this idea up with a statement that he made to a bartender later that night:

We need ideas from the public – pronto! Err… by which I mean we would like opinions from them – no rush. By which I mean… err… hmm.

The problem with the notion of getting a public consensus about Brexit is that we already quite recently canvassed for one – primarily by having a massive, nationwide referendum.

The result of this colossal public poll was that nearly half of us were simply not in favour of it. The other half were for it, and yet also quite divided about what ‘for it’ actually entailed – with some wanting to reject the Western neoliberal order, others wanting to build a massive wall of death around the island, and others who just weren’t really sure what they wanted (beyond, that is, the vague certainty that whatever it was, they were 100% sure that they wanted it).

Partially, the EU Referendum was called as a means for those in power to abandon responsibility for the decision – which is why the most prominent Brexit players fled from frontline politics like rats abandoning a sinking U-KIP. But as what we voted for had yet to be defined when we voted for it, the government is now encouraging us to actually give it a definite definition – namely so that they can later blame us for not having defined it better if it ultimately all goes to pot.

Since his poor performance in parliament, Davis has been spotted driving around London in a scrap metal wagon – calling through a loudspeaker for people to:

Bring out your Brexit ideas!

He is getting closer to building a consensus though – having now deduced from public opinion that all we want is to maintain the benefits of EU membership while simultaneously being in/out of it – ultimately existing in a Schrödinger’s cat-esque paradox where everyone is happy – just as long as they don’t stop to think about it too much.

Davis apparently intends to achieve this philosophical conundrum by simply not triggering Article 50 for as long as he can get away with it.

Regardless of what Brexit ultimately becomes defined as, voters should at least be assured that it will be Brexit.

It may not be the Brexit that anyone wanted – but hey – when you gamble, you need to be mindful that sometimes the mystery prize is nothing but an empty cardboard box with a question mark on the side of it.