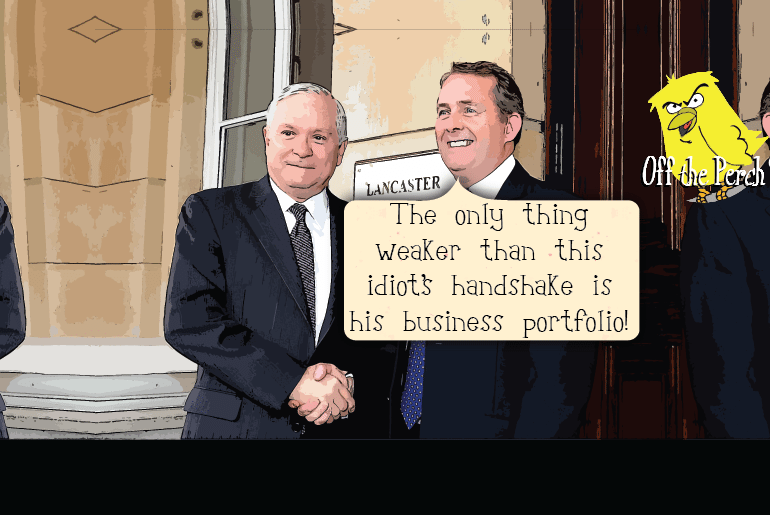 Secretary of State for International Trade Liam Fox tried to get fired over the weekend in a display of incompetence so flabbergasting it was only matched by the last thing that this apparently ironic government perpetrated.

It is currently Fox’s job to sell the UK as a trading nation around the world. What he actually did, however, was describe UK businesses like this:

This country is not the free-trading nation it once was. We have become too lazy, and too fat on our successes in previous generations.

Companies who could be contributing to our national prosperity – but choose not to because it might be too difficult or too time-consuming or because they can’t play golf on a Friday afternoon.

The UK’s senior trade official broadcasting to the world that our corporations are operated by idle, feckless, has-beens is like an individual setting up a dating profile that makes it clear they won’t:

c)  Hang around after the McDonald’s has been paid for.

Many assumed this to be simply the sort of gross incompetence you should expect from a man who has resigned in disgrace once before.

According to other reports, however, Fox may purposefully be trying to get fired – having realised that the government’s plan to wing Brexit simply isn’t taking flight.

Theresa May is obviously unable to let Liam go, as none of the Remain-supporting MPs would touch the position with a 10ft political stick, and the politicians who did support Brexit seem to have vanished quicker than Nigel Farage’s moustache.

In an attempt to force the Prime Minister’s hand, Fox has allegedly perpetrated the biggest political faux-pas of all – namely by turning up to work this morning in a cat leotard – telling the shocked reporters outside his office:

This is who I am now. This is me. Miaow.

Theresa May responded by sending him a crate of Whiskas, having a giant cat flap installed at Number 10, and calling an emergency meeting of MI6 to discuss what would happen if a senior minister was “accidentally” run over.

And we know that “accidentally” was phrased like that because she made air quotes when she said it, and then looked into the camera and said:

Fox is apparently considering his next move, while also playfully batting at the giant cloth mouse that Boris attached to his scratching post.