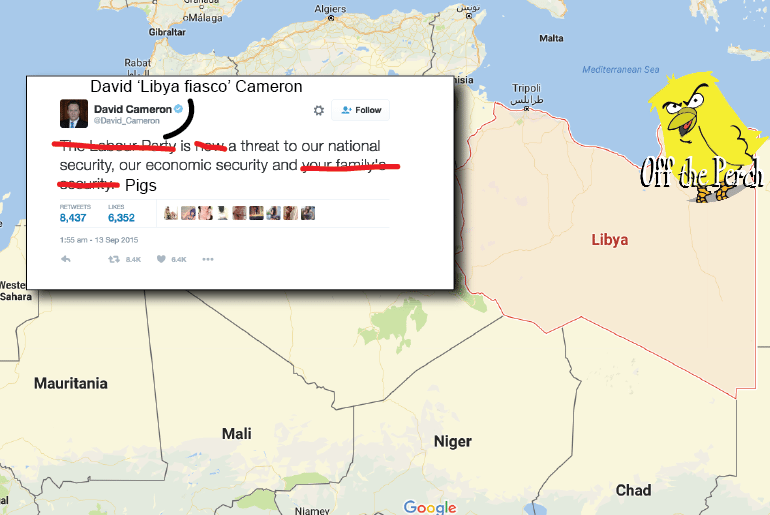 The former Prime Minister and national security aficionado David Cameron has come forward today to make us all aware of the latest threat to our safety – namely, David Cameron himself.

This is what Captain Dave Security had to say while simultaneously trying to perform a citizen’s arrest on himself:

As I was explaining, no one is more interested in national security than myself, and when I read the report into the colossal cock-up that I made in Libya, I knew that something had to be done – UNHAND ME, YOU SWEATY, SAUSAGE-FINGERED PIE!

At this point, the former PM produced a red-hot branding iron that had the words ‘TERRORIST SYMPATHISER’ moulded into it – a brand which he then attempted to brand himself with, even as he furiously fought against himself doing so:

HOW COULD A BRITISH PRIME MINISTER IN 2011 PREDICT THAT A MILITARY INTERVENTION WITH NO FOLLOW-UP PLAN HAD THE POTENTIAL TO GO AWRY!?

Now if you’ll excuse me, there’s a dinner function on world peace this evening, and my money-sense is tingling.

Anything less would be unpatriotic.

And you’re not a terrorist sympathiser, are you?