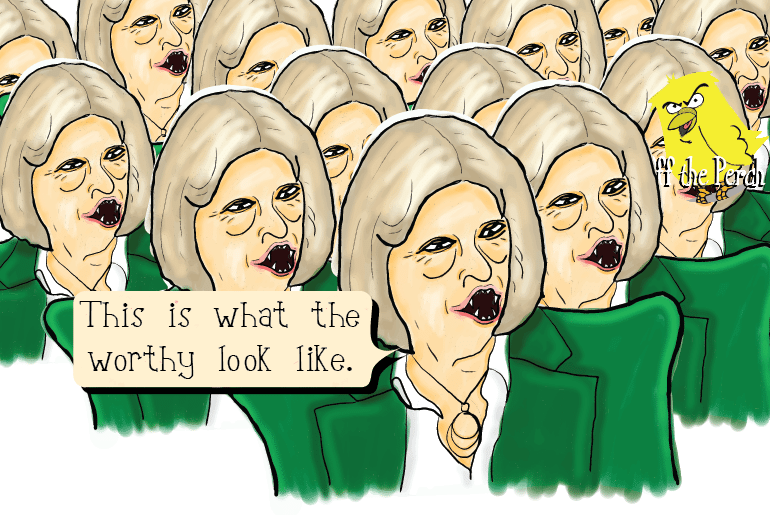 When Theresa May announced that she wants Britain to be the “great meritocracy of the world”, people reacted in one of two ways:

For those of you who don’t know, a meritocracy is defined as a system in which people are rewarded purely on merit. So in theory, every job should be occupied by the person most qualified to occupy it. Theresa May has already begun implementing this system in her own cabinet, of course, which is why Boris “water-melon smiles” Johnson is the Foreign Secretary.

It’s also why Jeremy “wrote a book about privatising the NHS” Hunt is still the Health Secretary. And why Liam “the guy who already resigned in disgrace once” Fox is still employed at all.

At first glance, the idea that people should be rewarded on merit doesn’t sound all that bad. I mean – how else should you reward people?

Of course, the philosophy completely falls apart when you remember what ideals the Tories do and don’t assign merit to.

And so what it comes down to is this:

Do you trust the Tories to decide what does or does not have merit?

A Tory meritocracy is unlikely to even do that, as it’s hard to imagine them turfing out the many unremarkable people in the Royal Family or the aristocracy.

What it would do is give them another stick with which to beat the weak, the poor, and the unfortunate.

Let’s never pretend that this isn’t simply the latest in a long line of cheap ploys to turn us against one another.

Let’s not pretend that this isn’t just an excuse to give themselves license to steal from the poor and give to the rich.

Let’s not pretend that these covetous boobs could even recognise merit – not even if it beat them to death with a giant, 3D model of the word ‘MERIT’.

And if someone asks you how we should assign value, tell them that we shouldn’t.

Merit is something that we’re born with – it’s not something that should be assigned to us by dead-eyed politicians, who deign to slop it out to their favourites like dinner ladies doling out meatballs.