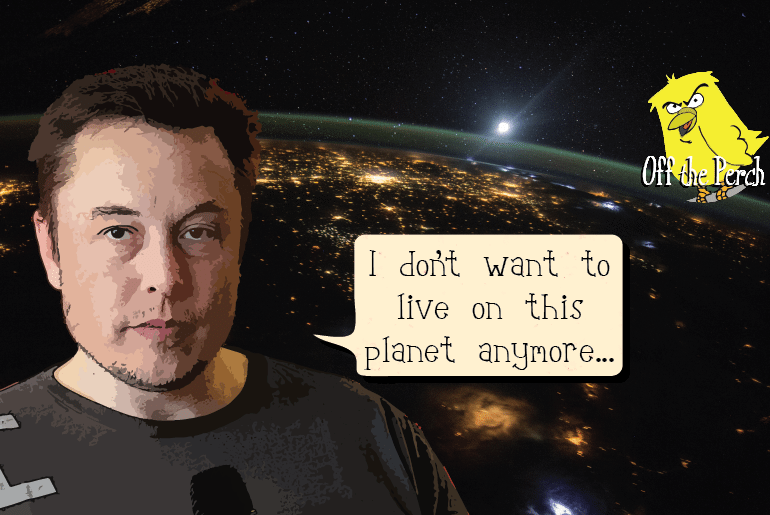 The world-famous inventor Elon Musk has announced plans to flee from planet Earth like a super-smart rat from a moronically sinking ship.

Musk was coy about his intentions at first – claiming that our dispersion throughout the stars was simply the best means of ensuring that our species endures. But since witnessing the latest Trump-related fiasco (the one in which the Donald accused Clinton of personally murdering Harambe the gorilla with her witch magic), the inventor has come forward to admit that planet Earth is just f*cked:

When the internet first came out, I thought it would be a great resource for disseminating information and understanding. Unfortunately, it also turned out to be an excellent means of sharing nonsense and butt-hurtery.

Who could have predicted that barely two decades after Google and Wikipedia gave us the means to research political candidates, we’d be faced with a choice between Donald Trump or Hillary Clinton? Or that many voters would actually find themselves in favour of one of these absolute horror-bastards?

This planet… this planet isn’t working.

I know that in Britain they’ve had enough of experts, so my plan is to round-up all of their unwanted specialists, and use them to form a genuinely functional colony on Mars.

I believe that this will work out best for both planets. The humans of Mars will be able to put their efforts into creating a sustainable and mutually beneficial society. The humans of Earth, meanwhile, will be able to carry on blaming all of their problems on whoever the people responsible for them tell them to.

They’ll also get to prove that us science-types were wrong about climate change all along. Or die a long and painful death as a result of floods, droughts, and extreme weather events. But hey, you win some you lose some, right?

If you’d like to join Elon Musk and his colonisers of Mars, just be aware that if you ever return, it will be to discover that papers like The Daily Mail have convinced everyone that a Martian invasion is imminent. Probably on the basis that Martians are lazy cowards who endure year-long space journeys because they want to steal all of Earth’s culture and benefits. Even though there probably won’t be much of either by that point.

Because why on Mars would you?