The Brexit Bunch beaten at chess by a pigeon - Canary 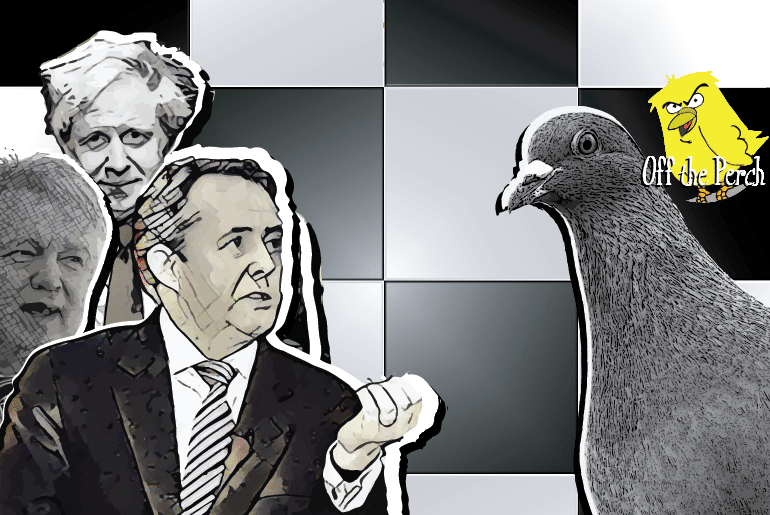 The ‘Brexit Bunch’ (i.e. Boris Johnson, David Davis, and Liam Fox) have admitted that they were beaten at chess by a pigeon this week. Although they did assure us it’s only the fifth such game that they’ve lost.

The trio have been warming up for the several years of brisk and unpredictable negotiating which will ensue as soon as Theresa May gets around to enacting Article 50. Unfortunately, they were unable to find anything with a comparable level of cunning to themselves, like a flatworm or a pile of bricks. Instead, they were forced to make do with the wiliest of not very wily birds – the pigeon.

The following is a transcript of their game:

JOHNSON: “I’ll take the first move if you don’t mind, chaps? And I’m going to move the bishop straight behind the king and stab it in the back.”

DAVIS: “Chess doesn’t work like that, Johnson – you shambling cacophony of arse!”

JOHNSON: “Okay, Mr Clever Clogs – how does it work then?”

DAVIS: “Chess works like chess. And these aren’t clogs as you bloody well know – they’re traditional British loafers, which just happen to be made out of mahogany!”

FOX: “Traditional British mahogany loafers? What does that even mean?”

FOX: “Yes – what tactics are we going to use against this infernal slum-buzzard?”

JOHNSON: “I was thinking we could start off by insulting its ancestral heritage, follow up by writing a limerick in which we accuse it of making rushed and sweaty love to a goat, and then finish off by joining its team while secretly hoping it will lose.”

JOHNSON: “Oh, and I suppose you’ve got a better plan have you, Fox? You knuckle-faced haddock!”

JOHNSON: “And what’s that then?”

FOX: “Well, I was thinking that we could tell the pigeon that we probably won’t win because we’re all too fat and lazy, and that we’d much rather be playing golf.”

JOHNSON: “Go on then, Davis. What’s your big idea?”

*DAVIS PAUSED AT THIS POINT, RESTED HIS HEAD IN HIS HANDS, AND THEN LOOKED UP WITH INCREDIBLE SOLEMNITY AND WISDOM*

FOX: “Oh, you absolute pie! And what does chess mean when it’s at home?”

DAVIS: “Chess means chess, Fox. Do I have to spell it out for you?”

DAVIS: “Oh right. Well of course I can.”

JOHNSON: “So what does it mean then?”

JOHNSON: “God, I hate you, Davis. And you look exactly like Tim Robbins would if he was sat on by a syphilitic elephant.”

DAVIS: “Ah, I do believe it’s landed us in checkmate, gentlemen.”

JOHNSON: “Piffle-tosh! Can’t we play against something stupider? I’m pretty sure Iain Duncan Smith is free all afternoon.”

DAVIS: “No, he’s no good I’m afraid. The slimy little chap just lets you win. It’s really rather disturbing, too, as he just sits there and sweats, licks his lips, and strokes his thigh every time you take one of his pawns. I think he DWPeed himself last time too. At least I hope it was pee.”

FOX: “Good lord. If there was any chance of us being held accountable for our incompetence, I’d actually be pretty worried at this point.”

Despite concerns that the people in charge of Brexit couldn’t deliver a self-delivering pizza, there is at least some light at the end of the tunnel.

Although there are of course plans to wall up the end of the tunnel to prevent any more light sneaking through.