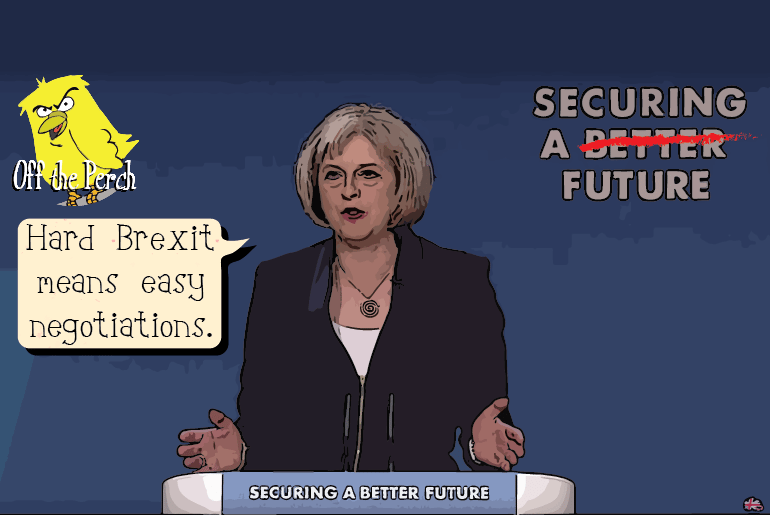 Theresa May has revealed to the world that Britain will be pursuing a ‘Hard Brexit’ – which is to say we will be letting Hard Brexit pursue us – essentially by sitting down and waiting for it to pounce on us.

The PM pitched the plan as being in our best interests. Others claim that she simply doubts the Brexit team’s ability to negotiate a good deal, while simultaneously having 100% confidence in their ability to secure a bad one.

The problem with leaving the single market to repel migrants is that much of our economic certainty is dependent on both access to the single market and the ability to use migrant workers to make up for our ageing population. So the Hard Brexit scenario is essentially like a person selling all of their hair to pay for a comb. Or – more accurately – like a person punching themselves in the groin because Nigel Farage double-dared them to.

Which is why the pound has immediately dipped back to its lowest level since July – even before all of the foreign investors who are only here for single-market access have had a chance to read it in the morning papers and spit their corn flakes out.

According to an inside source, Theresa May told the EU:

These negotiations seem to be incredibly one-sided against us. Is there any way that you could possibly use hideous apes instead of trained negotiators?

Allegedly, the EU bigwigs looked perplexed at this request, and told the PM:

Although there is no chance of us using lower primates to head our discussions, you are completely free to replace Boris Johnson, Liam Fox, and David Davis with whomever you want. They can be as human as you like.

The Prime Minister is of course completely unable to do this, however, as no one else in the country would touch the position with a 10ft political stick.

Hard Brexit it is then. pic.twitter.com/iEQbonB2ww

Which is why we’re on a path towards the Brexit of UKIP’s dreams. Because although it seems to be the least beneficial option for the country, it is at least an option that Theresa May can comprehensively achieve.

And if it goes badly?

Well – that’ll be the foreigners’ fault.

Ah – except we won’t be able to blame them anymore, because we either won’t let them in, or they won’t want to come here in the first place.