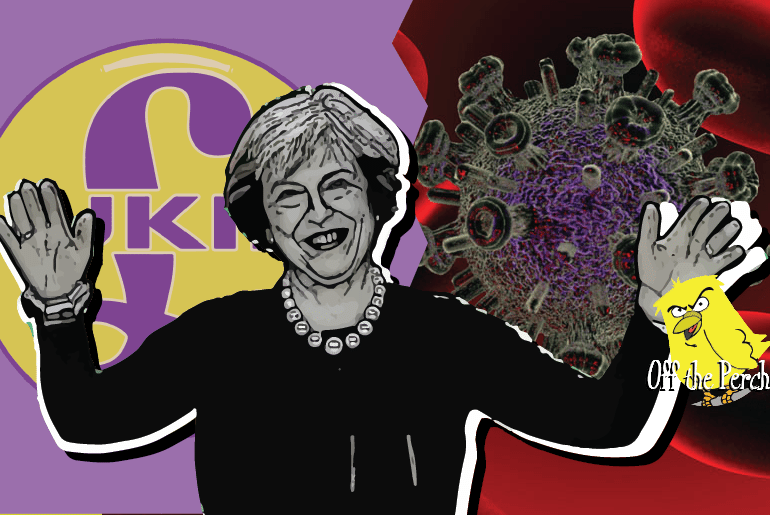 When media outlets reported that Theresa May was aiming to seize the centre ground, they seemed to ignore the fact that she’d also announced that Britain’s new motto was the following:

The problem with the Tories plan to make the UK a vibrant global power is that they also want to make it a dreary, backwards shithole pic.twitter.com/bi93q7Uqke

This led many people to wonder:

The Tory Party has now expanded on the matter in a secret memo – a memo which we were able to intercept when an irritated Liam Fox threw it at our heads:

The two ideological touchstones we hope to straddle are a nasty illness that possesses no intelligence whatsoever and the Ebola virus.

We have to emulate UKIP now, and in fact we need to outdo them if anything. With the state of things as they are, we couldn’t make Britain work even if we wanted to. To maintain appeal in this dystopian, Tory-wrought bastard-scape, we plan to make Britain a one-issue nation. And that one issue will be immigration.

How will we make everything about immigration? Well, it just takes a bit of imagination.

For instance, if someone is worried about the value of the pound plummeting, we’ll tell them it’s only worth less because Muslims keep drawing burkas on the Queen to hide her shame/value.

If someone is concerned that fracking caused an earthquake in their local area, we’ll tell them that the tremor was actually caused by swarms of illegal immigrants rushing off to the post office to send in their Great British Bake Off applications.

If they’re worried about things like women’s rights, privacy, or the environment, they’d probably never vote for us anyway, and can f*ck off. Although yes – we will also blame it on immigrants, just to be safe. We won’t put a lot of effort into it, though, and will basically just shout “foreigners!” any time these issues come up.

As mentioned, UKIP never quite reached the full potential that this paranoid, hate-inducing rhetoric allows, which is why we’re looking to the Ebola virus for inspiration. The way that Ebola replicates and spreads indiscriminately is exactly how we want our message of old-school hyper-nationalism to disseminate amongst the masses. Ebola does go that little bit too far, though, and has a worrying tendency to just kill everyone, which isn’t what we want at all.

Or at least not until robots can pick up the slack anyway.

If you’re worried that Britain will struggle to be a success if it becomes a one-issue nation, you may be reassured to know that other countries have been very successful on the back of scapegoating minorities. You may be less reassured to know that, primarily, what they succeeded at were things like oppression, inhumanity, and evil.