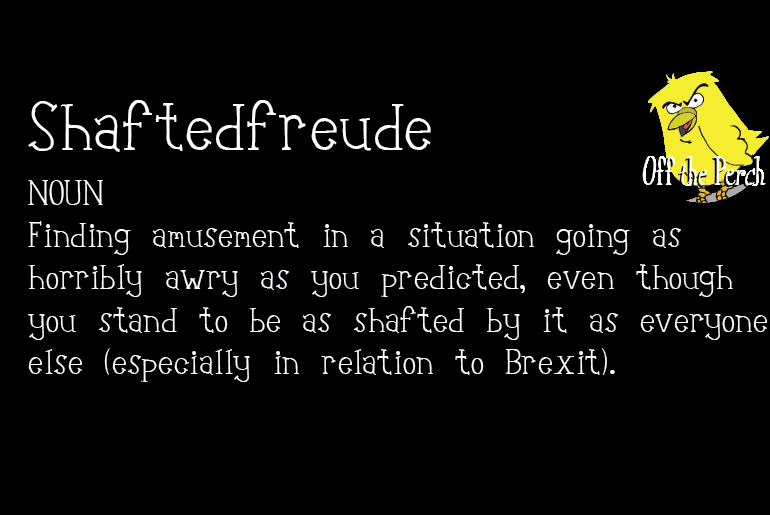 When the UK voted to leave the European Union, and the luminaries of the Leave campaign abandoned their responsibilities like rats from a tired metaphor, the people who voted Remain began to experience a curious emotion. An emotion which had until then been nameless.

The word that has been coined to describe this feeling is:

Finding amusement in a situation going as horribly awry as you predicted, even though you stand to be as shafted by it as everyone else.

Post-Brexit, I saw Michael Gove and his swamp monster smile fleeing back to the Murdoch Press. I beheld the trail of shattered promises behind him and I got the shaftedfreude so hard I fell off my bike.

It was clear that some sort of strange emotion was in play when the people who were previously the most terrified of Brexit became the ones most amused by it. Especially as their predictions of the future hadn’t changed at all.

The feeling itself was nothing new, of course. In the past, it was mainly experienced by people whose map reading ability was wilfully ignored by their partners, only for the pair of them to get lost in the arse end of nowhere as a result. It has never before been experienced so widely, however. And the sheer number of people feeling this shaftedfreude has resulted in the emotion attracting a word to itself like a planet’s gravity field pulling in a small moon.

Shaftedfreude is not the only feeling to have a new name either. Many people are now experiencing the following emotions:

The realisation that a referendum is different to an online poll, and may actually have real-life effects.

I got refgret when I realised that the thing people warned me would happen actually happened. But what I want to know now is why no one warned me that warnings can come true?

2016: blend of regret (the emotional underpinning of the phrase “uh oh”) and referendum (an ill-thought out political manoeuvre to test which line of ideological hogwash the public has most strongly bought into).

The inability to distinguish whether people like Boris Johnson and Nigel Farage are over-privileged elites who only have their own self-interest in mind, or modern day Robin Hoods.

I used to think Farage was all about sovereignty. But my Johnsnosticism started tingling when he went over to America to tell those foreigners they should vote for that orange groper.

The notion that Britain will always succeed as long as its subjects believe in it.

Well of course the pound is plummeting! NONE OF YOU ARE BRELIEVING HARD ENOUGH!

2016: the idea that everything will all work out in the end if you just believe hard enough is essentially the ending to every Christmas movie ever made. It is not a political or economic philosophy that has ever been proven to work.

If you yourself are experiencing any of these last three emotions, please excuse the shaftedfreude of those who voted Remain. They can’t help it. It’s just incredibly and terrifyingly hilarious.