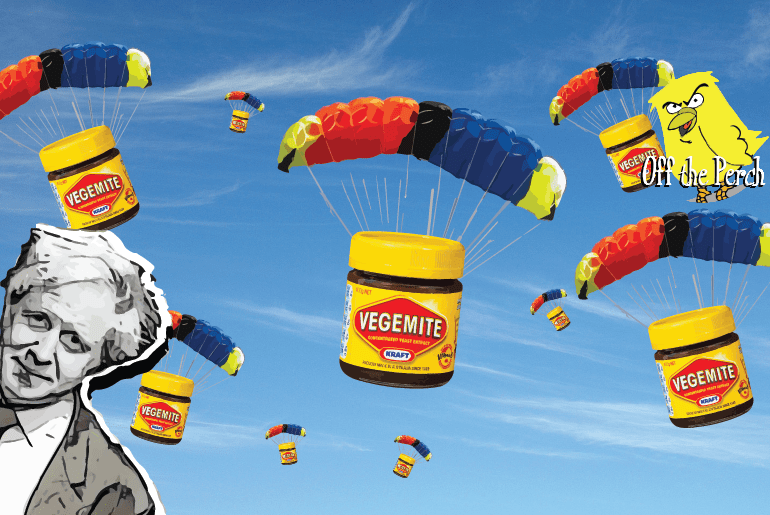 Following the news that we can no longer afford Marmite, the UK government has stepped forwards to ensure that our access to the umami spread goes unbroken – even if that does mean lowering our standards considerably.

Although it seems like importing Vegemite would be more costly than just buying our own Marmite, the Tories have now perfected the art of attracting foreign investors – primarily by:

Which is why Theresa May was today able to announce the creation of the UK’s first Vegemite Production Factory/Nuclear Power Plant.

This announcement attracted several questions – the main one being:

May didn’t actually answer this, of course, because it was a question, and that’s just not how she rolls. But what she did do was go on at length about Britishness, patriotism, and fighting back against the elites. All despite the fact that she had just announced another instance of the Tories abandoning an iconic British institution for short-term gain and long-term concerns about Godzilla monsters.

Behind closed doors, Australians are claiming that forcing Brits to abandon our lovely, tangy Marmite for their horrible, tangy Vegemite will be a huge victory of entrepreneurial colonialism for them. They will, of course, have to sell it at a loss to excuse the weak pound, but the nuclear money will more than make up for that. Especially if there is some sort of contamination issue, and the radioactive Vegemite starts self-replicating.

Australian Vegemite delegates have already begun a charm offensive to endear us to their unpalatable fungus-honey. This is why they began air-dropping free samples of the stuff on us this morning – with many people complaining:

In an attempt to negate some of the losses they’ll make from basically just giving Vegemite away, the Australians have also tried to paint the issue as a humanitarian crisis at home. They have even recorded a charity single called ‘Do They Know It’s Breakfast?’ to encourage their citizens to donate pots of their horror-gloop to us.

The song is essentially just a re-working of Do They Know It’s Christmas? with the following word-swaps:

Although there are now concerns that we’ll have to let someone build a nuclear power plant every time we run out of a popular household brand, Liam Fox has assured us:

Not to worry – we’ve got loads of space.

Because there is always room in the UK for foreigners – just so long as they’re here to implement some sort of awful, corporate boondoggle which will only be of benefit to aristocratic land-barons and laissez-faire terror-yuppies.