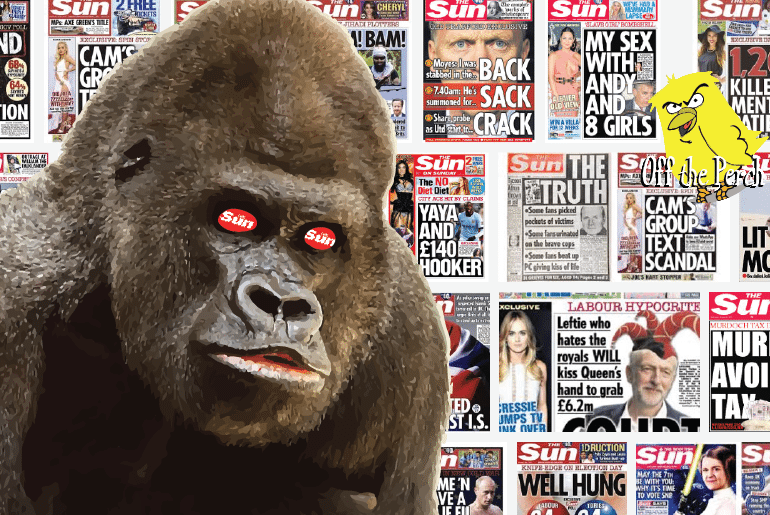 On 13 October, a 29-stone gorilla called Kumbuka launched a daring escape from the high-security wing of London Zoo. He was soon caught and brought back into captivity, but one mainstream media outlet wasn’t going to leave it there. The S*n, ever the enemy of all that’s good on the face of the Earth, went into full distortion mode in a characteristically offensive way – smearing Kumbuka as a “psycho”.

In one report on 14 October, The S*n‘s melodramatic headline referred to Kumbuka as a “psycho escaped gorilla”. It covered its back by attributing the quote to a zoo worker in another article. But that didn’t make up for the fact that it had clearly ignored the advice of mental health campaigners at Time to Change who’ve clearly said:

Using words like ‘psycho’, ‘nutter’, ‘schizo’ or ‘loony’ to describe someone with a mental health problem is certainly offensive and unacceptable.

Even with this presumably conscious blunder in mind, the paper had already assumed that Kumbuka was somehow mentally unwell. In the interest of balance – a concept the murky Murdoch rag isn’t too fond of, Off The Perch went to London Zoo to speak with the captive silverback (Kumbuka, that is).

First, we asked Kumbuka what he thought about The S*n‘s portrayal of him. He said:

I’ve always been an enthusiastic supporter of a free press. And in my cell here at London Zoo, I regularly read an array of respectable papers. But I believe we’ve allowed The S*n to get away with its distasteful and detestable activities for far too long. If it isn’t spreading terror throughout society by invoking suspicion of ‘the other’ at every possible juncture, it’s following celebrities or left-wingers around waiting for them to make a minor mistake. And I for one am not going to let them get away with this shameful behaviour!

When asked why he’d tried to escape from the zoo, he insisted:

My intention was not to shock or inconvenience the visitors. But I honestly can’t remember how long I’ve been here. And while I sympathise with all beings on Earth suffering from mental health issues, I must insist that I have no such issues myself.

I simply don’t enjoy being in captivity and having people stare at me all day long. Who does? Who wouldn’t get justifiably angry when imprisoned and treated like an inanimate object? My escape attempt was an act of resistance – an assertion of my free will.

I will keep fighting for my freedom until my very last breath. And when I’m free, I’m going to have a very amicable discussion with Mr Murdoch about his demagogical behaviour. The S*n has done more than its fair share of damage, and it’s time that Murdoch took responsibility for his actions.

Our time with Kumbuka was more enlightening than all The S*n‘s decades of reverse-wisdom combined. It also gave us a picture of a very erudite ape and a committed freedom fighter that we haven’t seen anywhere in the mainstream media.

So to Kumbuka and gorillas around the world, we salute your resistance. And we’re right behind you!

– See more from Time to Change.

– Join the boycott of The S*n. See here and here for more information.

Featured image via Pixabay and John Shafthauer for Off The Perch