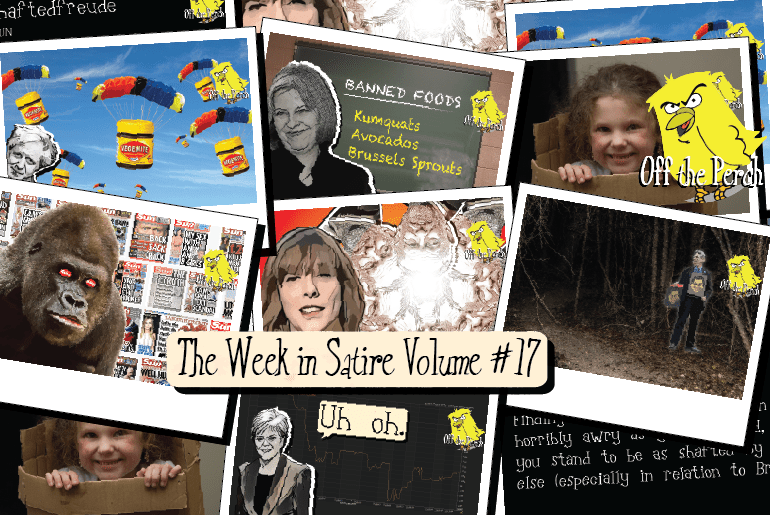 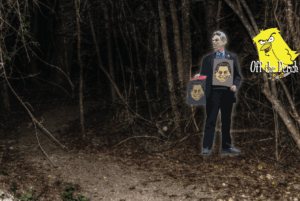 Although the sudden appearance of hundreds of clowns is the weirdest global event of 2016, it still pales in comparison with what has been happening in Westminster – namely the appearance of the only thing more universally unsettling than a clown.

A masked lurker began appearing outside the Houses of Parliament last month. Although protesters commonly wear Tony Blair masks to protest illegal wars and the collusion of corporations, media, and government, there was something a bit off with this impersonator from the start.

For one, he never actually protested anything – he just appeared behind politicians and stood there staring at them – his dead eyes boring into their sold-out souls like a maggot going at a tainted doughnut. He also didn’t say anything: he just loudly breathed in and out – as if he was draining them of their political essence – as if he was feeding on them.

The police were eventually called to hunt the creature down after it appeared behind a Tory minister – a minister who responded to the fright by throwing his assistant to the floor and then running away screaming. Following a brief search, they surrounded the masked-thing and made him remove his mask – revealing what nobody in the world could have suspected – that the creature was Tony Blair himself.

Following a reshuffle in which Jeremy Corbyn appointed even more women to top posts than last year (when only 50%+ of cabinet roles went to women), Jess Phillips has been forced to look elsewhere for hints of sexism.

It didn’t take long for the Labour firebrand to find something, however, and the following is a transcript of a long rant that she subjected several passengers to on a local bus:

Did you know that Jeremy Corbyn has only ever married 3 women? He’s like a hundred years old or something; he could have married loads of women in that time. I think it’s really telling that brocialist Jeremy only gave a chance to three, if you ask me.

“BUT WE DIDN’T ASK YOU”, several of the passengers shouted.

Oy, you horrible d*ckhead. You don’t get to talk to me like that, you c*nt. I’m a f*cking politician, you bag of sh*t. F*ck off! 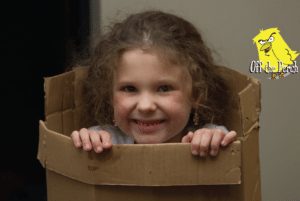 The Housing Minister, Gavin Barwell, has suggested a novel method of solving the housing crisis. Not novel in the sense of it being fresh and new though. Novel as in novelty – like a whoopee cushion or a plastic dog sh*t.

…that is “innovate”, by simply making rooms unbearably/stress-inducingly small. This is nothing to do with the fact that smaller hovels means more hovels, obviously, and that more hovels overall will always turn a bigger profit – even if each one is individually cheaper. Of course not. Although they will cost about a quarter of a million pounds, and there will be a sh*t-load more of them. 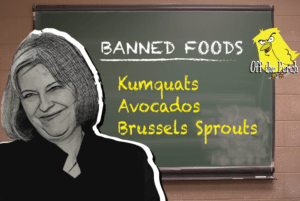 Government to send ‘Food Patriotism Inspectors’ to homes, and ‘out’ citizens with non-British food in their fridge

Off the Perch has been required, under a new government wheeze, to employ at least one right-wing writer. Frank Lee-Bull loves capitalism, Theresa May, and bunting.

In a bold new move to shore up British farming and food production, Prime Minister Theresa May has announced a ‘Food Patriotism Programme’. Inspectors will be making visits to every home in Britain. Citizens with non-approved produce in their fridges, pantries and cupboards will face being named and shamed on the UK Government website. There will be fines, or even jail, for persistent and serious offenders.

Private sector firm G4S won the bid to provide the inspection teams and administer the scheme. £2.5bn in government funding per year has been green-lit for the duration of the current parliament. Asked about the costs of the programme, government spokesperson Anita Grubb said:

This is exactly the sort of scheme British taxpayers are only too happy to invest in. By investing in the Food Patriotism Programme, every taxpayer will be doing their bit to protect the farmers and food producers of our great nation.

The whole economy will see a boost from cutting out the money that is currently being spent on foreign business. It’s time to make sure people are buying British. 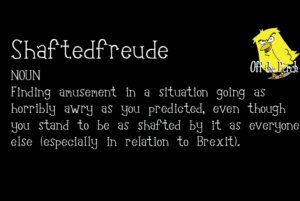 When the UK voted to leave the European Union, and the luminaries of the Leave campaign abandoned their responsibilities like rats from a tired metaphor, the people who voted Remain began to experience a curious emotion. An emotion which had until then been nameless.

The word that has been coined to describe this feeling is:

Finding amusement in a situation going as horribly awry as you predicted, even though you stand to be as shafted by it as everyone else.

Post-Brexit, I saw Michael Gove and his swamp monster smile fleeing back to the Murdoch Press. I beheld the trail of shattered promises behind him and I got the shaftedfreude so hard I fell off my bike. 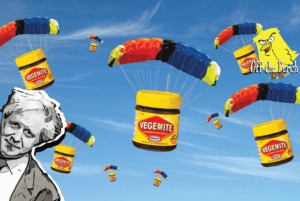 Following the news that we can no longer afford Marmite, the UK government has stepped forwards to ensure that our access to the umami spread goes unbroken – even if that does mean lowering our standards considerably.

Although it seems like importing Vegemite would be more costly than just buying our own Marmite, the Tories have now perfected the art of attracting foreign investors – primarily by:

Which is why Theresa May was today able to announce the creation of the UK’s first Vegemite Production Factory/Nuclear Power Plant.

This announcement attracted several questions – the main one being: 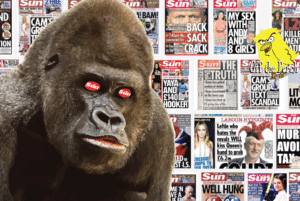 On 13 October, a 29-stone gorilla called Kumbuka launched a daring escape from the high-security wing of London Zoo. He was soon caught and brought back into captivity, but one mainstream media outlet wasn’t going to leave it there. The S*n, ever the enemy of all that’s good on the face of the Earth, went into full distortion mode in a characteristically offensive way – smearing Kumbuka as a “psycho”.

In one report on 14 October, The S*n‘s melodramatic headline referred to Kumbuka as a “psycho escaped gorilla”. It covered its back by attributing the quote to a zoo worker in another article. But that didn’t make up for the fact that it had clearly ignored the advice of mental health campaigners at Time to Change who’ve clearly said:

Using words like ‘psycho’, ‘nutter’, ‘schizo’ or ‘loony’ to describe someone with a mental health problem is certainly offensive and unacceptable.

Even with this presumably conscious blunder in mind, the paper had already assumed that Kumbuka was somehow mentally unwell. In the interest of balance – a concept the murky Murdoch rag isn’t too fond of, Off The Perch went to London Zoo to speak with the captive silverback (Kumbuka, that is). 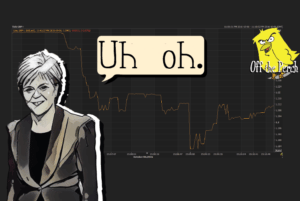 Following the announcement of plans for another Scottish independence referendum, the world is once more seeing a Prime Minister of Great Britain making threats to try and keep the union together. The fact that her threats are the exact opposite of David Cameron’s shows just how much things have changed since then.

The problem is that these threats definitely will apply if Scotland stays in the UK, so why wouldn’t it want to see what happens if it doesn’t?

The other problem for the UK government is that since the last independence referendum – the one in which it lied, bullied, and cheated to get its own way – the trust that Scots place in Team GB has understandably been severely diminished.

So the ‘remainers’ could wheel Gordon Brown out again. But many Scots now trust the treacherous sack of potatoes about as much as they would a hissing Hannibal Lecter in a straightjacket and bite-mask. They could request that the BBC spreads more misinformation. But Scots now know that, in times of trouble, the Beeb’s presenters are hollowed out and worked like giant finger puppets by the talons of the Tory beast. They could even rope J.K. Rowling back in. But there are only so many Harry Potter analogies a person can hear before the novelty wears off and they realise that a billionaire New Labour fan probably doesn’t share the same priorities as they do.