Earth voted the least hospitable planet in the solar system 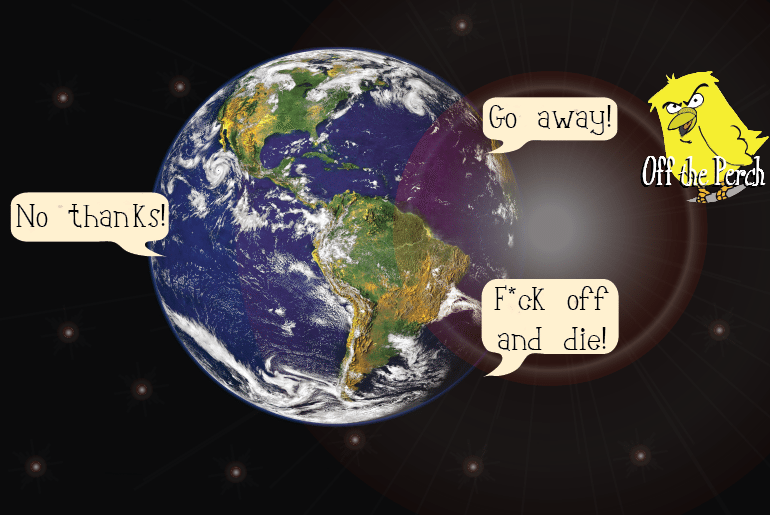 Following a selection process so elaborate that it makes the Nobel Prize for Literature look like it’s handed out to people the judges just fancy meeting, NASA has announced the updated list of our solar system’s most hospitable planets.

Earth had previously topped the table, but 2016 saw our rating drop faster than a Vote Leave promise on a cartoon anvil. An occurrence which will undoubtedly come as no surprise to anyone who has been awake for the past 12 months.

To find out more, we spoke to Carmella Spacewoman, one of the boffins behind the report:

To be honest, if it wasn’t for David Bowie, Prince, and Terry Wogan still being alive, Earth’s reputation would have plummeted years ago. Things were awful, but at least you knew that the big-three were still out there – being weird, doing perverse things to guitars, and spouting irreverent observations about one-man death metal bands from Scandinavia.

The point is that on any other planet, you would at least be killed quickly. On Earth, however, the inhospitable elements will make sure that you rack up a load of debt first. They’ll also make sure you’re divided from your fellow human beings over issues that they themselves are responsible for. They’ll even charge you to read why it’s your fault in their newspapers!

If you were to find yourself on another planet, you would definitely be killed, but at least you’d know it wasn’t anything personal. At least you’d know it was merely the unfortunate application of universal constants. On Earth, however, you know that most of the woes people are beset by are the product of a terminal cycle of greed, hatred, and stupidity. And the cycle is being perpetrated by people who could very easily just stop it.

So that (along with the Phil Collins comeback) is why we’ve given Earth the worst rating of any planet anywhere. Even worse than the secret planet where Donald Trump’s hair comes from!

If you’re worried about our rating drop, be reassured that you won’t have to worry about it for very long. Unless of course all of the scientists are wrong, and Donald Trump is right.

Which seems unlikely, but then again the guy has a space-alien for a wig, so who knows?