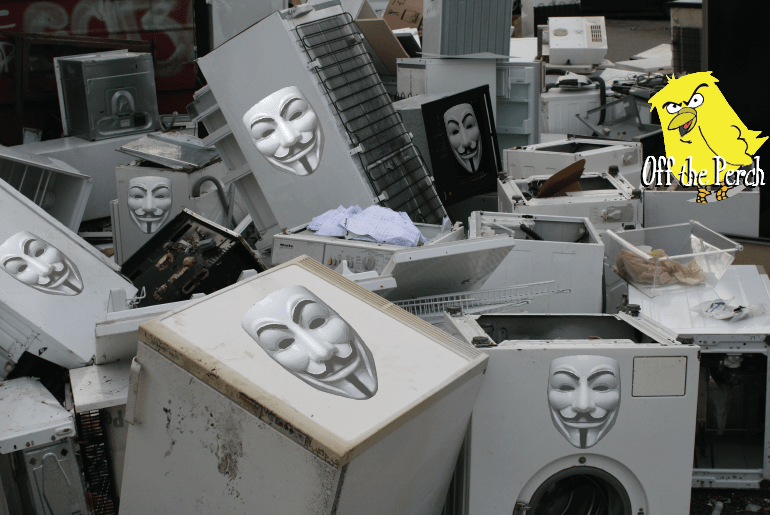 When hacktivists disabled large swathes of the internet last week, they did so by using the inherent insecurities that exist in wifi-enabled smart-showers, tech-toasters, and iFridges.

The explanation for this phenomenon is that these smart-yet-stupid devices are incredibly easy to hack. Hackers can use this insecurity to create botnets. A botnet is a set of simple and interconnected machines which are largely dormant but can be brought into action at a moment’s notice (much like the current Manchester United squad). These botnets can then disable websites via a Distributed Denial of Service (DDoS) attack, which involves sending more traffic at a server than it can process. So in layman’s terms, it’s like driving an elephant momentarily insane by covering it in angry termites.

Of course, this was far too complicated to understand for Fox News anchor Hoagie Skunkgristle, which was why he started sweating and pulling at his collar when all of this was explained to him by an expert.

This was Fox News a few minutes ago, trying to explain a DDoS attack to their viewers. I am laughing so hard. pic.twitter.com/at7128LxR7

It’s also why he turned to face the expert and asked:

Are you telling me that my trouser press is trying to take over the world?

The expert attempted to clarify, but Fox News has spent years eradicating things like nuance and subtlety. So Skunkgristle was only able to take in certain keywords – keywords like:

And so the sweating news anchor continued to pant and shake his head, until he suddenly stood up, pulled his concealed weapon out, and then screamed:

There’s one of them now!

Skunkgristle then fired several rounds into a sandwich maker that one of the backstage crew was using to press a ham and egg sarnie. Not waiting to see if the sandwich press would strike back, Skunkgristle promptly turned to the cameras and shouted:

People! You need to listen to me! The day has come, and we are under attack from the machines! You need to take your guns, and you need to shoot all of your washing machines, nose trimmers, and vibrators. And quickly, before it’s too late!

At this point, his co-anchor Patsy Eaglehead pointed out that guns are also machines, which resulted in Skunkgristle hurling his firearm at the nearest wall. This unfortunately caused the weapon to discharge and shoot the news host in the left buttock, prompting the wounded buffoon to scream:

The reaction among Fox News viewers was instantaneous, and a rampage of mindless destruction spread across the country like an atomic Mexican Wave of nonsense – resulting in over $7bn in damages, and over 4,000 men being accidentally shot in the buttocks.

On the plus side, Fox News viewers have proven that they’re ready to defend themselves against minor appliances and white goods. On the negative side, they’ve once more shown that they’re almost entirely unready to deal with reality.