The Daily Mail pasted White Dee pics into a print of ‘I, Daniel Blake’ 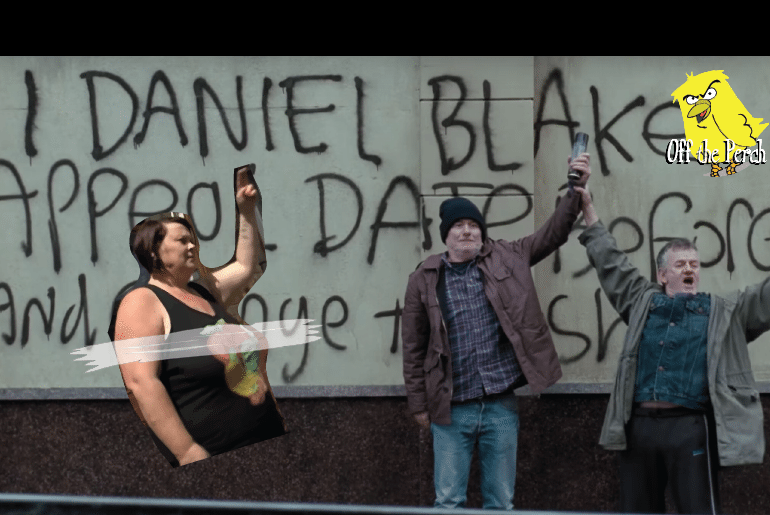 When failed human being Toby Young delivered a critique of Ken Loach’s new film, most people struggled to read past this statement:

I’m no expert on the welfare system, but several aspects of I, Daniel Blake don’t ring true.

Because if he had even a passing interest (or had listened to one of the many people who have dealt with this crooked system), he might have realised that I, Daniel Blake is a somewhat tame account. Especially when you consider that PEOPLE ARE BEING FOUND FIT FOR WORK MERE HOURS BEFORE DYING OF A TERMINAL F*CKING ILLNESS.

If they’d carried on, they would have read:

The two protagonists are a far cry from the scroungers on Channel 4’s Benefits Street, who I accept aren’t representative of all welfare recipients.

But Loach has erred in the opposite direction. For a filmmaker who styles himself a ‘social realist’, he has an absurdly romantic view of benefit claimants.

Daniel is a model citizen. At no point do we see him drinking, smoking, gambling, or even watching television. No, he is a welfare claimant as imagined by a member of the upper-middle class metropolitan elite.

Of course, many found it strange to hear The Daily Mail bemoaning a lack of balance – The Daily Mail being the mid-market tabloid horror-rag that has previously supported such non-moderate propositions as:

The Daily Mail decided to live up to its newfound dedication to balance by sending Toby Young to glue cut-out pictures of Benefits Street‘s White Dee into prints of I, Daniel Blake. Just inserting her image into the movie wasn’t enough, however, which is why the self-styled “toadmeister” stood in the projection room shouting the sort of things that he thinks us poor people* shout – including:

I’m a subhuman layabout who deserves everything I get. Innit!

Unfortunately for Young, his screaming drew the attention of cinema-goers, and they promptly phoned the police to come and deal with him. As the attending officers led him away, they asked if he’d like to be treated like they would treat someone from Benefits Street for the sake of balance. Young quietly shook his head in response, and was promptly led away.

Although this was obviously a surprising thing for a mainstream news slug like Toby Young to do, the clues to his intent were all there in his article. Especially in the picture that was titled:

Why are there no characters like Deirdre Kelly, aka White Dee, in Ken Loach films?

Which of course begs the very good questions: Why are there no people like Daniel Blake in Benefits Street? Or in the tabloids? Or in the public’s collective consciousness?

Because you can criticise Ken Loach for showing a clear bias, but bias is the appropriate response to a system that treats death and misery as an acceptable by-product of itself. And you can talk about a need for balance, but balance isn’t going to tip the scales when one side is weighed down with oh-so-many tonnes of right-wing propaganda. And you can even pretend that you yourself are without bias, when in actuality you just don’t give a f*ck, because you know it’s all happening to somebody else.

*Author’s note: Satire aside, I do currently receive financial assistance, and that’s likely to carry on for several months at least. This is a situation which is being perpetuated by the fact that we have to home school our son, because funding for the one-to-one support that doctors assure us he needs is now practically non-existent in the Tory-run education system. Oh, and although Toby Young is correct in predicting that I don’t listen to Radio 4, I do at least catch up with their documentaries via the podcast.