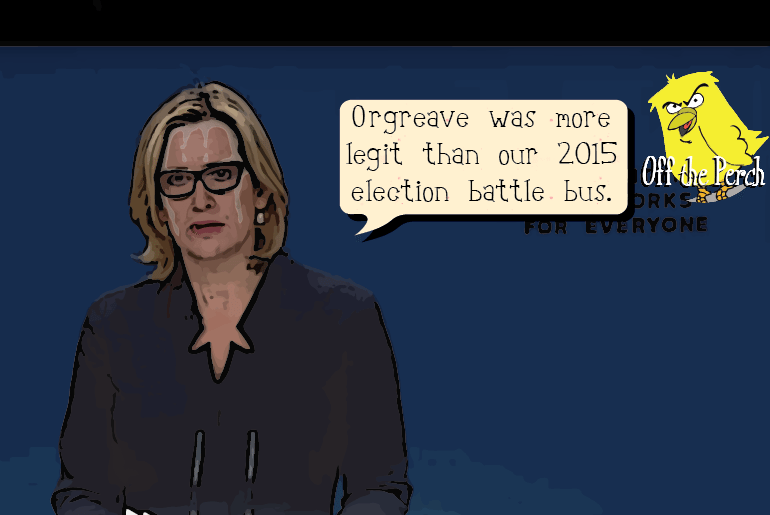 Amber Rudd – the demonic Tory mouthpiece who’s best known for suggesting that UK business should register foreign workers as if they were dangerous sex criminals – has given her verdict on The Battle of Orgreave – namely by shrugging her shoulders a bit and saying:

As her explanation as to why there won’t be an enquiry has left everyone bemused and irate, we decided to follow up and ask what’s really going on.

The following is what she told us:

Look, I’ve had a bit of a look-see at the available evidence, and I can’t see anything wrong personally. I wouldn’t even use the word ‘evidence’ to describe it actually. It’s more like… err… whatever the opposite of evidence is. A word that I should really know, as it’s what we use to inform all of our policies.

Anyway, take the photo of what looks like a charging policeman on horseback about to crush an unarmed woman’s skull in with his baton. If you look at it like that, it’s absolutely horrific. But if you assume that there was a wasp on the other side of her, then you can convince yourself that he was heroically trying to shoo it away from her face. And I can’t imagine a review panel disagreeing with that assumption. So why waste money finding out?

Rudd says Orgreave was too long ago to query

Shame it was before cameras, or scenes like this may have been captured.

And the officers claiming that they were given pre-written statements? Obviously it doesn’t sound good: sounds in fact like the sort of corruption that even Sepp Blatter’s bookie might blush at. Unless of course you wilfully decide to believe that these officers were merely given example statements to show to them how their observations should be recorded. Example statements which coincidentally described several key events that happened at Orgreave. Example statements which weren’t later retracted because… I don’t know… space aliens maybe? I need to work on that last bit, obviously, but I’m getting there – trust me.

Jesus. This ‘telling the truth’ business is harder than it looks.

We should point out that ‘telling the truth’ is in inverted commas because Rudd performed air quotes as she said it. Which neatly sums up the level of disdain that these people display every time they pretend to be acting in our interest.