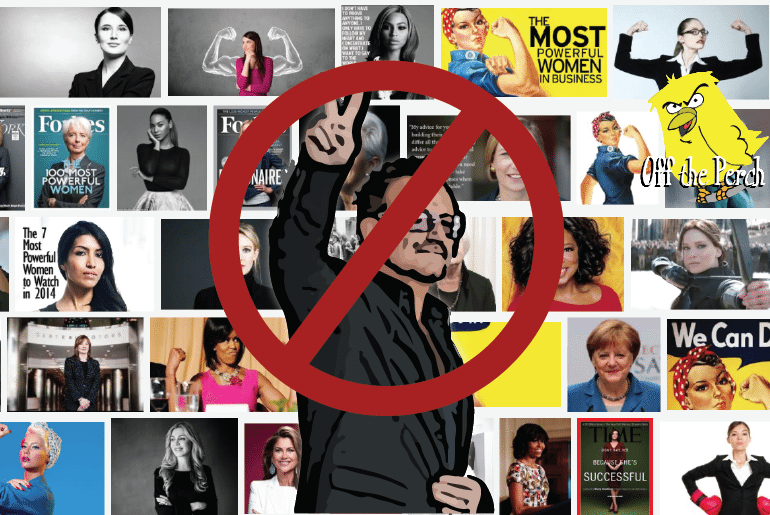 Following Glamour magazine’s bizarre decision to make Bono its Woman of the Year, most people thought:

And then of course:

And then a little:

Although Glamour magazine seems to have reversed away from this steaming pile of nonsense more quickly than Tom Cruise in that video (the Glamour website is now proclaiming Bono to be the mag’s first ‘Man of the Year’), that hasn’t stopped people from becoming more annoyed than when U2’s latest album was forced on them by Apple.

The problem with giving a man the ‘Woman of the Year’ award is that it implies none of the 3.7 billion women on the planet can match the awesome and award-worthy magnificence of a man. The problem with said man being Bono is that Bono is corrosively annoying – meaning that Glamour has pretty much literally sprinkled salt into the wound.

To make up for this stark and ridiculous inconsistency, we have decided to make every woman in the world our:

U2 Frontman of the Year

Now ordinarily, we would have given this award to someone who is actually the frontman of U2, but hey, why not just give it to someone who isn’t? That’ll grab people’s attention, right? Because there’s nothing more click-triguing than heralding a great big “fuck-you” to 50% of the world’s population by blowing through the meaty trumpet of Bono.

We also have several other trophies that Bono is welcome to claim, although he probably won’t want to – namely the awards for:

Sunglasses Twerp of the Year

Tax-Avoiding Hypocrite of the Year

Edge’s Best Mate of the Millennium

Most Aggravating Fly Look-a-Like of All Time