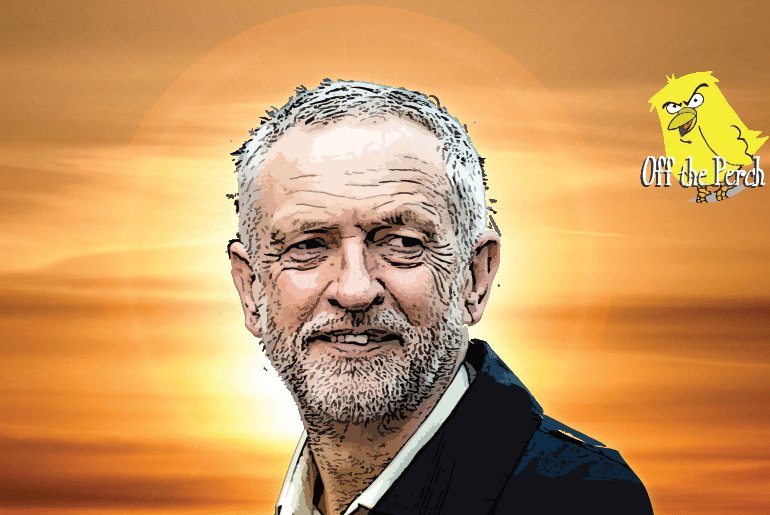 Some people today genuinely believe there’s a dangerous cult surrounding Labour Party leader Jeremy Corbyn. For most people without super-powered leeches attached to their brains, however, it’s clear that Corbyn is about as far from a cult leader as Boris Johnson is from being a respected statesman.

The idea of a ‘Cult of Corbyn’ still floats through the mediasphere like a particularly annoying airborne virus. And that’s mostly because of the military grade lie-bazooka that Tory spin doctors have aimed at their friends in the corporate press. But that may soon change, as Off The Perch‘s undercover operations in the official Conservative Spin Cellar have borne some wonderfully leaky fruit.

The Tory campaign to manufacture a ‘Cult of Corbyn’

Tory propagandists have been spinning faster than an out-of-control silkworm in recent months. Their aim? To make their ‘cult’ smears on Corbyn and his supporters stick like a toxic mixture of brussels sprouts and superglue.

And in their efforts to compare Corbyn’s pacifist politics to the messed up belief systems of infamous cult leaders like Charles Manson and Jim Jones (the guy who got hundreds to commit suicide in a jungle in 1978), they made careful and intricate plans – which our Off The Perch researchers have now managed to get hold of.

In order to make their imaginary ‘Cult of Corbyn’ seem realistic, they first did their research. To fit the definition of a ‘cult’, they had to make the pro-Corbyn movement seem like “a small religious group” that was either “extreme or dangerous”.

One of their plans was to say Corbyn had founded a group called ‘The Heavenly Order of the Lunar Temple’. This, the spin doctors wrote, saw the Labour leader undertake wacky religious ceremonies in the middle of Sherwood Forest. Here, his followers would worship principles like peaceful coexistence, popular ownership of key industries, and universal healthcare. They would also burn effigies of Margaret Thatcher while dancing around a campfire in geography teacher jackets with images of Corbyn sown onto the collars.

Not exactly ‘extreme’ or ‘dangerous’, but the Tory propagandists clearly thought geography teacher jackets were an existential threat to the well-established British tradition of wearing suits and ties.

The sultans of spin also looked at the writing of experts. FBI veteran and author Joe Navarro, for example, has spoken about how cult leaders tend to be “pathologically narcissistic”. This means words like ‘I’ dominate their conversations, as they believe they alone have the answers to the world’s problems.

Using this principle, the Tory propagandists altered one of Corbyn’s most famous speeches from 2015 to make it look like he was an incurable narcissist. The reworked speech was of the Labour leader’s words before the 2015 vote to approve airstrikes in Syria. And Corbyn apparently said:

Mr Me, I recognise that decisions to send myself to war are the most serious, solemn and morally challenging of any that I have to take as a member of myself… For all of me, taking a decision that will put myself in harm’s way is a heavy responsibility… It’s wrong for me here in myself to see a problem, pass a motion and drop the bombs pretending I’m doing something to solve it. That’s what I did in Afghanistan, Iraq and Libya. Has terrorism increased or decreased as a result?

I’m aware that there are those with military experience, including members on the benches opposite, who have argued that extending UK bombing will – and I quote – “increase the short-term risks of terrorist attacks in Britain.”

Although they didn’t have to change that part, because Corbyn did actually use the word ‘I’ twice there. Proof, they probably thought, that their task of smearing Corbyn would be easier than previously expected.

Expert rejection of the smears

Off The Perch brought in Jeremy Corbyn expert Prof P Slover to analyse the leaks. She began by referring to the guidelines of anti-cult activists. Cult leaders, she said, lack democratic/financial accountability and general tolerance of outside opinions. They also abuse their followers and are paranoid about threats from the outside world. Slover then responded to allegations of a ‘Cult of Corbyn’ by speaking about how Corbyn:

The difficulty is, Slover stressed, that the word ‘cult’ doesn’t always mean something negative. It can also mean, for example:

By that definition, Slover said:

I could easily belong to the cult of Marmite, Leeds United, Nelson Mandela, or the NHS. But unfortunately, that’s not the definition most people think of when the word ‘cult’ comes up. So it’s best just to ignore anyone who thinks the ‘Cult of Corbyn’ is an actual thing.

Now that the Tory plan to smear the resurgent progressive movement inspired by Corbyn as a cult has been exposed, perhaps we can start work on debunking the next smear attempt.

What a time to be an Off The Perch reporter!