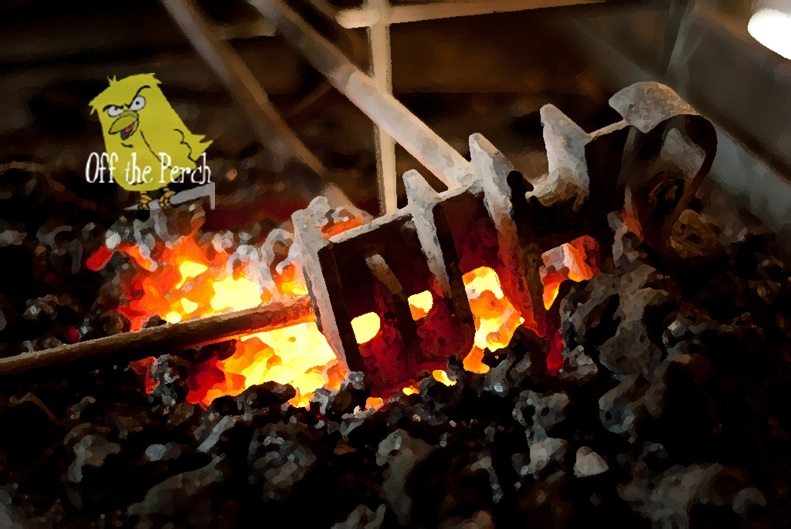 Democracy is technically “government by the people”. But today, many of the world’s biggest ‘democratic’ parties seem to think it actually means ‘government over the people’. (Or above. Or on top of. Their definitions vary.) And one thing that annoys them more than anything else in their magical little world of spin-fairies and control-freakery is people daring to change party allegiance. So now, they’ve come up with a new way of ensuring a one-time vote becomes a vote for life. Branding! You know, what they do to animals with those hot metal sticks.

A plan as cunning as an upside-down turnip

The ugly seeds of this new plan were sown after the Democratic Party’s recent loss in the US presidential election. In particular, it came to life in the stinky little back-room of a high-level Democrat’s brain:

Traitors, I say! How dare they not vote for Hillary Clinton? She was perfectly lovable. What with all those secretive corporate speeches. And her covert clusterf*ckery abroad. What more could people ask for? There ought to be a way to ensure that once a person goes Democrat, they can never go back… Hmm…

And that’s how political branding was born.

Upon agreement with high-powered Republicans (who’ve suffered groin kicks of their own thanks to annoying voter flip-floppery in the past), branding checks will come into force in the next US elections. If voters have a donkey branded onto their foreheads, they’ll have to vote Democrat. And if they have elephants, they’ll have to vote Republican. In fact, even if they don’t go to the polling booths, their parties will automatically receive their votes anyway.

“Democratic streamlining, we call it,” said one party insider. “It’ll save everyone a lot of time and money if we only have to focus on getting the support of first-time voters. We’ll be able to just ignore everyone else. It’ll be brilliant.”

Over in the UK, Tony Blair – who has the superhearing of a bat and the sightlessness of a star-nosed mole – quickly got wind of this idea. Sick of democracy not going his own way and tired of pretending to understand ordinary people’s concerns, he immediately saw the genius of political branding:

Aha! Once New Labour, always New Labour. They were my supporters first! Stick that in your vegetarian burger and eat it, Mr Corbyn!

The Conservative Party also liked the idea, of course. One senior Tory explained:

Rather than us having to convince voters we’re the right choice for them all the time, they should just pick the colour they like the best and stick with it for life. We don’t want to be walking through plebby neighbourhoods listening to people’s problems. We’d much rather they just voted for us without us having to get our hands dirty, pretend that we care, or promise to actually do something.

But Blair perhaps summed up the logic behind the branding policy best:

Once people have voted for us, we should have the right to change our policies. And those voters should have to change with us. That’s only fair. We’re entitled to their continued support, you know? They wouldn’t want to be a traitor to their party, would they? If we decide to wear Peppa Pig onesies all the time and sing God Save the Queen 37 times a day, we expect them to follow suit. Is that too much to ask?

The only problem is…

Unfortunately for the mainstream parties of the US, the UK and elsewhere in the world, no one is born a member of a particular party. That means they’ll still have to keep up appearances to attract first-time voters. And because most people would ideally vote for a party that genuinely represents their views and interests, parties will have to keep reining themselves in. In the run-up to election season, at least.