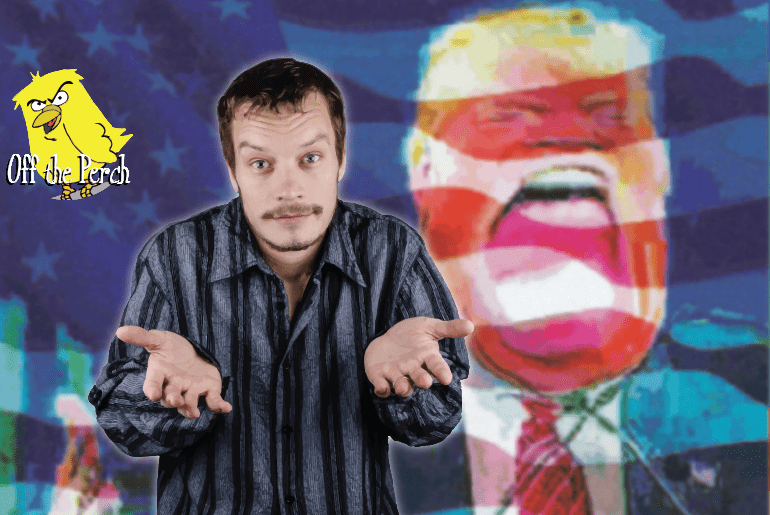 On 8 November, the human haggis that is Donald Trump was unexpectedly elected to the White House. Since then, several people have been assuring us that he probably won’t be any worse than the alternative. And primarily, these people have been straight, white men.

Off the Perch went stateside to catch up with one of them and bask in the comfort of his certainty. This is what Jack Imalright had to say:

Primarily, I’m just glad that Shillary didn’t get in. I mean, can you even…?

At this point, there was a commotion outside, and Jack went to the window to close it.

There’s been a lot of outbursts like that, sorry. What happened first was the Trump Squads came to ship Muslims off to Guantanamo. So I shouted down at them ‘hey, just be glad Killary didn’t get in, right?’ Because even though the Cold War seems to have been a failed, decades-long experiment into whether or not the world’s superpowers could commit collective suicide, I’m still convinced it could go hot at any minute. I feel bad for all those deportees, obviously. But it’s gotta be better than living with the incredibly improbable likelihood of nuclear annihilation, right?

Not long after that, they came for the African Americans. They started frisking and beating them and such. And as bad as it was, this sort of thing was going on under Obama, too. I mean, I don’t doubt it’ll be worse under Trump, but maybe this escalation is exactly what people need to make them realise what’s going on? Because black lives matter, right?

Later they came for the women, and they grabbed them by… well, they grabbed them. And they put them in these body braces. They seemed to be designed to take control of these women’s bodies. Don’t get me wrong, I’m all for a woman’s right to choose. But Hilliary had a pretty terrible track record with women, too. And if all that it takes for people to realise that these Democrats don’t represent them is for women to go through a painful period of de-emancipation, then that’s a sacrifice I’m willing to make.

Finally, they came for the LGBTQs, and they tore up their marriage certificates. I dread to think what Dollary would have done, but you can bet it would have been nearly almost as bad.

At this point the noise outside really ramped up, and Jack went down to see what was going on. He returned ashen faced and trembling.

They said that Toblerones won’t have as many triangle bits as before.

Jack then proceeded to smash up his flat, before weeping for everything he had lost.