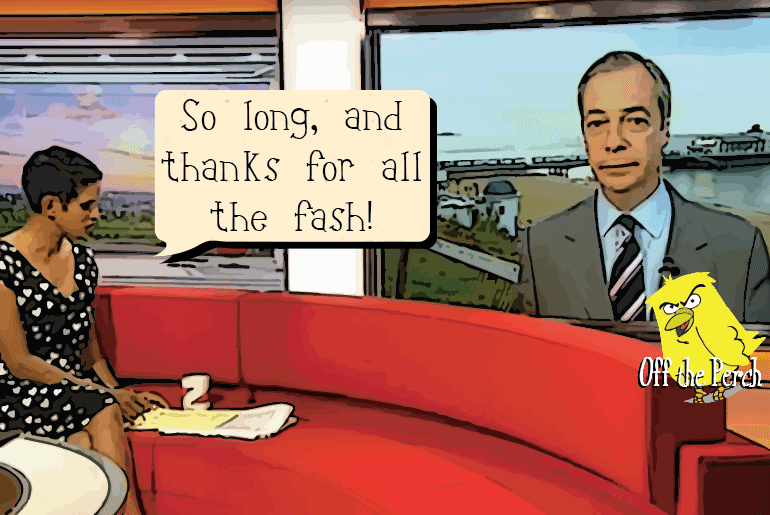 Although it initially seemed like Trump’s victory was an unmitigated uberf*ck, some benefits have now come to light. The first is that Brexit seems like much less of a shot in the foot. The second is that Katie Hopkins and Nigel Farage – the Posh and Becks of hate – are both considering a move to the States.

Which begs the question, who will the media invite to spout xenophobia unchallenged? Who will they invite to normalise the sort of toxic hatred that led to every authoritarian regime ever? Who will they have to be their novelty racist – not realising that the novelty act is the one who’s laughing at them?

These are the current frontrunners:

Remember Big Mouth Billy Bass? The annoying robotical fish that used to sing ‘Don’t Worry be Happy’? Well there are plans afoot to re-program one so that it shouts “foreigners” instead of singing. This would allow the robot to pinpoint the cause of any problem exactly how Nigel Farage would. Although it would take more programming to emulate Hopkins, as she does at least hate all human life equally.

It obviously can’t be the case that all taxi drivers are racist. It’s also unlikely that they’re more racist than any other profession. And yet the ones who are really aren’t shy about talking about it. Which is weird, because people in other jobs rarely seem inclined to bear the darkness inside themselves to you. Fish mongers never tell you that they like to punch cats for example. Lollipop ladies never tell you that, if anything, Hitler didn’t go far enough.

Which is why certain taxi drivers would be ideally suited to take up the mantle of Hopkins. To play the role of the person who opens their mouth and allows horror to pump out of it like liquid waste from a busted sewage pipe.

Farage is usually disgusted by the thought of violence against women. Unless said violence is being perpetrated by a rich white man, obviously, in which case it’s all shits and giggles. And this is why Punch of the Punch and Judy Show fame would be an ideal replacement. Also, beyond his awful attitude towards women, he’s also quite irritating. And a bit of a puppet-faced d*ck.

We’ve all been around long enough to know that when Nigel Farage resigns he’s more often than not replaced by Nigel Farage. Like a bad, spiteful penny that’s in need of a good Cillit Bang.

There is a problem with Nigel Farage leaving – beyond the migraine-inducing irony of him becoming an economic migrant. And this problem is that people will think he represents what British people are actually like. Especially as he’ll probably tell people that’s the case.

So it isn’t enough that he’s made people here hate foreigners. Now he’s going to travel the world making foreigners hate us too.